New York City is anticipating one of the worst blizzards in history, according to Mayor Bill de Blasio. Now everyone in this godforsaken town is freaking the fuck out.

Guys, DO NOT go to the Park Slope Food Coop right now. It's crazy in there. pic.twitter.com/ewDnotCFrV

Though we thought your first instinct would be to stock up on that loud and/or booze, depending on your preference, we were wrong. Everyone is converging on bread aisles in grocery stores from Inwood to Bushwick because apparently toast, ham sandwiches, and bread pudding are the cuisines of choice during snowmageddon​s.

The bread aisle of our local supermarket, courtesy of @Souriant_Nymh pic.twitter.com/7ib9UMiDYq

This is the bread aisle in Shop Rite. Yay snow. pic.twitter.com/sSrpCuaDGZ

Bread aisle at 24 hr Pathmark. Looks like #Blizzard2015 will be remembered by sandwiches! #nbc4ny pic.twitter.com/5EP9SKP7Ej

Bread aisle at our local market ahead of #blizzardof2015 ...our HQ closing early today to prepare/stay safe! pic.twitter.com/rM4EUGrjIW

I worked at the grocery store tonight. Here is the bread aisle... #blizzardof2015 pic.twitter.com/P0usbxFEPH 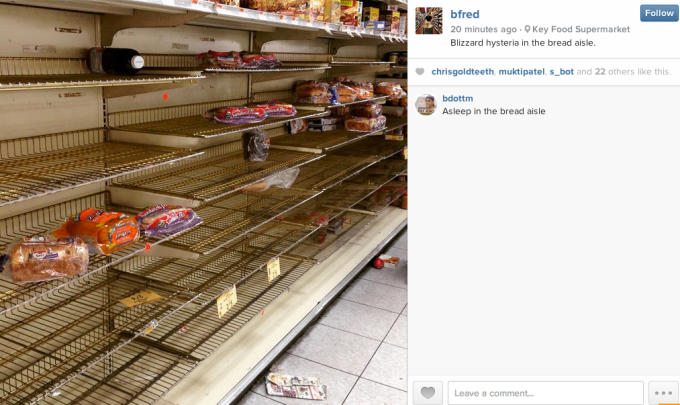 From the looks of it, if you were one of the lucky ones who got your hands on a loaf of Pepperidge Farm, you might be able to resell that sliced gold for a sizable profit on Craigslist assuming you've got an enterprising spirit. Just don't forget that, you know, there's a dangerous storm happening—safety first.

Ice storm was predicted a couple weeks ago and this is what the bread aisle looked like. #breadandmilk @lizzzO_o pic.twitter.com/FKmEMQejeJ

Bread aisle picture from a high school friend in the Hudson Valley of New York. And so it begins.... #blizzard2015 pic.twitter.com/mP0uIVD2jn

Bread is hard to come by right now (and in a stunning example of peak caucasity, so is kale.) But there's no shame is waiting in a long-ass line for bread. A grilled cheese during a snow day is no laughing matter, despite what Gov. Chris Christie says. And really though, what we should probably all be worried about is water.

"Happy birthday, Maya, here's a blizzard and no water in the grocery store" pic.twitter.com/88YEBHCfh1