A movie theater in Texas is determined not to let the hackers win. In response to Sony completely canceling The Interview amid terrorist threats, the Alamo Drafthouse Cinema in Dallas/Fort Worth will show Team America: World Police instead.

Team America's plot, as you may recall, revolves around Kim Jong Il, the late father of current North Korean dictator Kim Jong Un. Putting it in theaters once again amounts to shoving a big red, white, and blue middle finger in the communists' faces. 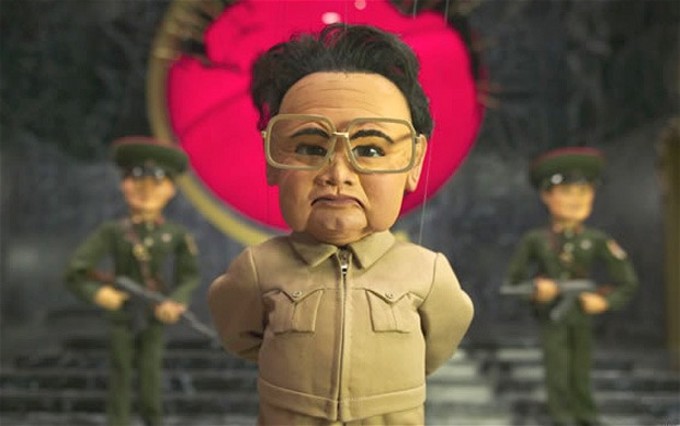 In addition to showing the film once for free, the theater will also hand out American flags and other "patriotic items." A note on the theater's website reads:

"Sure, you can celebrate your independence the usual way: slow sipping a beer as you stand over a grill while people you have only mild contempt for wait inside for their free meal. OR you can join The Action Pack as we celebrate the GREATEST MOVIE MADE ABOUT AMERICAN PATRIOTISM EVER and celebrate its 10th anniversary!

The world is different in 2014 than it was in 2004. Kim Jong Il is gone. I don't know if Michael Moore is still around or not. But a lot of the brilliance in TEAM AMERICA is timeless. Acting is still the greatest gift any human being can possess, and it's the only way to save America from the terrorists. Puppet f***cking  is still awesome. And Matt Damon is still Matt Damon.

So celebrate your indendence (sic) this year with the Action Pack. We'll have subtitles for all the songs and all of our favorite quotes, so you'll have plenty of opportunities to scream out "AMERICA! FUCK YEAH!" at the top of your lungs. And yeah, we will have American flags, red white and blue streamers, balloons, and more for everyone. And THAT is how true American heroes will be celebrating this year, but if you want to let the terrorists win...well, that's your prerogative."

Sounds like good ole Texas, doesn't it? The state never disappoints in screaming 'Merica. This time it has the added bonus of being appropriate.

UPDATE: Unfortunately, now it sounds like Paramount Pictures is trying to save their behinds, and is not allowing theaters to show Team America:

Are we Letting Terrorists Win? Celebrities on Sony Pulling "The Interview"

Obama: Americans Should Go to the Movies