Oh boy. We already knew that Sony spent this year struggling to make the Steve Jobs film written by Aaron Sorkin, but we had no idea Jobs was such a Grade A clusterfuck behind the scenes.

The latest Sony hacks reveals the squabbling that went down between Sony Pictures co-chairman Amy Pascal and Jobs producer Scott Rudin, and it's real ugly. In a series of leaked emails the two tear ruthlessly insult each other and Angelina Jolie. Their relationship soured when David Fincher was chosen to direct Jobs instead of Jolie's Cleopatra movie. This upset Jolie and led Rudin to tell Pascal, "YOU BETTER SHUT ANGIE DOWN BEFORE SHE MAKES IT VERY HARD FOR DAVID TO DO JOBS." 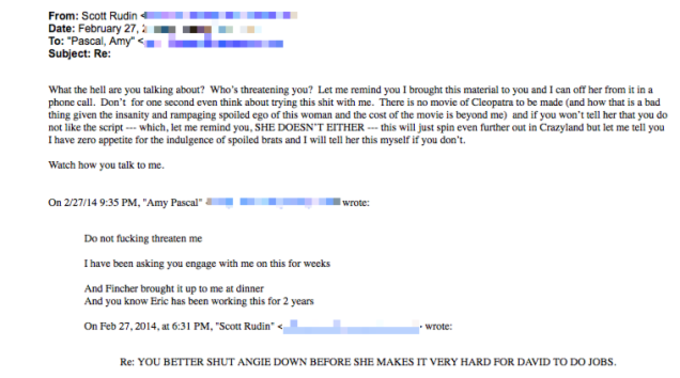 "You better shut it down

That is what you said

They are all beAt and they play games with each other

We knew how pissed she and Eric would be that we gave him the jobs script and if you don't think he made. Big ducking deal out if that your crazy

Have you forgotten how this works

We can't even schudule one ducking meeting

And we haven't even had a meeting yet

I liked the script we got in December so did you

I don't he cares about discomfort anyway"

More barbs are traded in a series of lengthy of exchanges—which you can read in full here—including Rudin taking down Jolie once again:

"I'm not destroying my career over a minimally talented spoiled brat who thought nothing of shoving this off her plate for eighteen months so she could go direct a movie. I have no desire to be making a movie with her, or anybody, that she runs and that we don't. She's a camp event and a celebrity and that's all and the last thing anybody needs is to make a giant bomb with her that any fool could see coming."

By November, when Jobs was destined to leave Sony and Fincher was long gone, it was clear Rudin and Pascal's relationship would never be the same. Pascal begs for one more chance at the film: 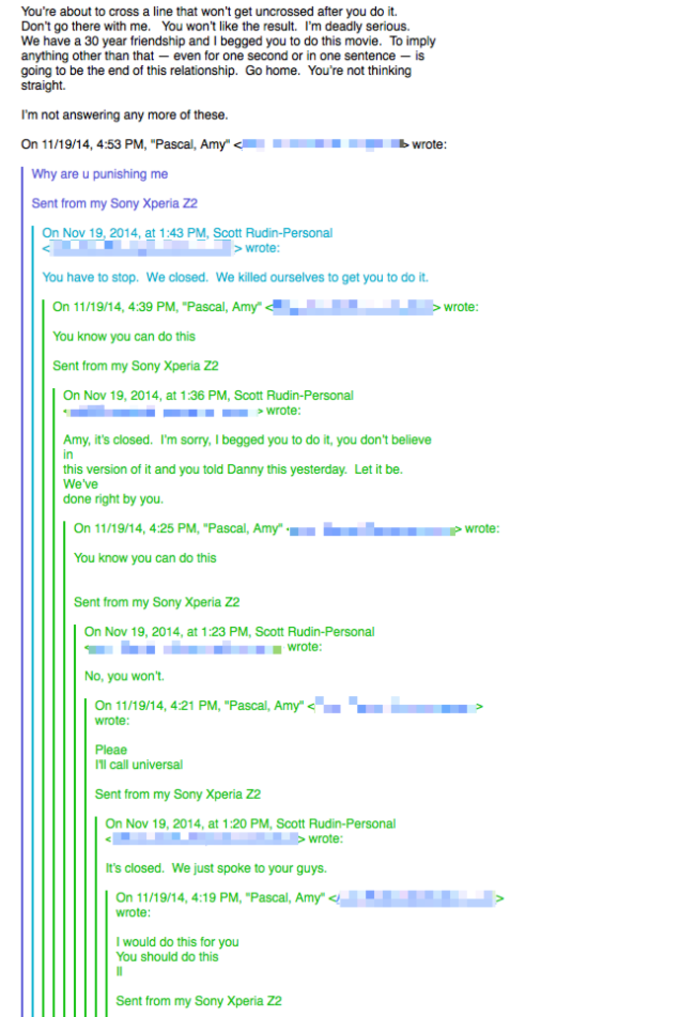 "I have worked something out for you with Universal and whether or not you take it is up to you— but so we are clear, I am done being your advocate here as you don't deserve one exhalation of breath on your behalf. You've behaved abominably and it will be a very, very long time before I forget what you did to this movie and what you've put all of us through."

"You've destroyed your relationships with half the town over how you've behaved on this movie. If you don't think it's true, wait and see. Let's see the next filmmaker WME puts in business at Sony or the next piece of star talent. I'll bet my house I'm right."

The continued hacks have been a nightmare for Sony, but this may just be the worst yet. The studio lost what looked like a sure hit to Universal, and now it has to be embarrassed by having its dirty laundry hung from the Hollywood sign.