Understand: Nobody "needed" a sequel to Horrible Bosses. But that summer 2011 movie made $209 million worldwide, which for a comedy means a sequel will be spawned automatically, whether anyone wants it or not. Fortunately, Horrible Bosses 2 turns out to be another funny romp down the avenues of vulgarity, a success due largely to the unquenchable chemistry that has developed between its three stars.

This time around, Nick (Jason Bateman), Kurt (Jason Sudeikis), and Dale (Charlie Day) have set out to be their own bosses, launching a company to manufacture a bathroom gadget they've invented. The film opens with their appearance on a morning talk show to promote it, a sequence that relies heavily on an old sight gag but which is otherwise an apt reintroduction to the trio's dynamics. Dale is sweating nervously and jabbering like an idiot; Kurt alternates between ogling women and enabling whatever nonsense Dale is up to; and Nick, the most sensible of the three, tries to preserve their dignity while maintaining a low-boiling exasperation with them (and with life itself).

The three get screwed over by an investor, catalog tycoon Bert Hanson (Christoph Waltz), and his jerky son, Rex (Chris Pine). Their financial ruin is imminent unless they can recoup $500,000. If only they knew someone rich and loathsome whom they could kidnap and hold for ransom...

Like many comedy sequels, Horrible Bosses 2 is as much a remake as it is a continuation. It has a different director (Sean Anders, of Sex Drive and That's My Boy), and different writers (Anders and his regular collaborator John Morris), but many of the situations are replayed with slight variations. Jennifer Aniston's sex-addicted dentist returns, only this time Bateman's character falls for her, a great detail that makes Nick seem even more pathetic. Kevin Spacey's bad boss is in prison, where the three stooges visit him for business advice. Jamie Foxx is back as MF Jones, guiding our heroes through their life of crime as before, as bad at negotiating his fees as ever. 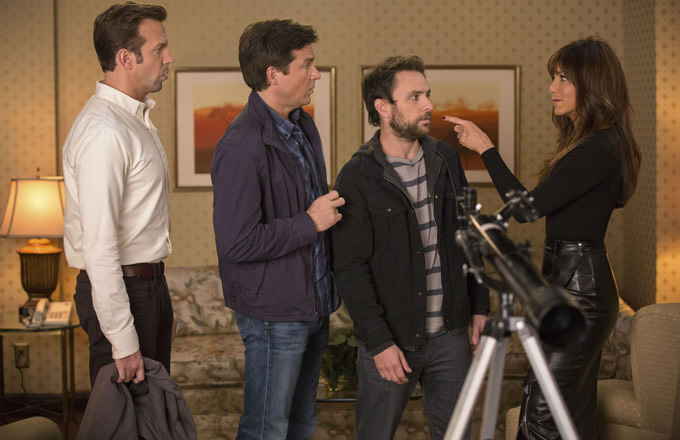 But despite the repetition (and there's plenty of new material, too), Horrible Bosses 2 works as a sophomoric dark comedy because of Bateman, Sudeikis, and Day's fearless commitment to their characters' short-sightedness and self-destruction. The group dynamics lead to consistently ripe comic scenarios. Dale is the manic idiot, Kurt is a little brighter but easily distracted, and Nick is "smart" yet ultimately pliable. There's something inherently amusing about three morons all accusing each other of being morons. Elsewhere, Waltz seems to be enjoying himself in the role of another smiling, merry villain, and Pine is surprisingly sharp as his son, wisely playing it seriously, the way a dramatic actor would.

Eric Snider is a contributing writer and film critic. He's got jokes.

The 50 Worst Movie Sequels of All Time