Neo San Fransokyo is about to explode—with hugs!

Big Hero 6 is the first of Walt Disney Animation Studio’s 54 films to feature Marvel Comics characters (Marvel Entertainment was acquired by Disney in 2009, as we all will be one day), and it balances those worlds so perfectly that it seems as if the movie were scripted on a scale. Like a version of The Avengers for anyone who thought that movie was too edgy, or Frozen for anyone who thought that movie should have ended with a giant portal of some kind falling onto a metropolitan environment without killing anyone, Big Hero 6 is as inoffensively opportunistic as mainstream animation gets. But if the film is almost unrecognizable from the (much darker) series of graphic novels from which it gets its name, the few key elements it does retain from the source material are enough to imbue Big Hero 6 with some unique charms of its own.

What most immediately, and most profoundly, sets Big Hero 6 apart is its willingness to reflect the diversity of its audience. Both Disney and Marvel have been deservedly taken to task for the monocultural whiteness of their movie worlds, but this broad mash-up between the two brands so casually introduces an Asian-American lead that it’s almost as if the film, like the children for whom it’s been made, is oblivious to how radical an idea that is. Continuing commercial animation’s recent trend towards inclusiveness (The Book of Life is still in theaters), Big Hero 6 may not bend over backwards to correct all of the prejudices that make American movies such a poor representation of American moviegoers, but it nevertheless resists the stagnant idea that superheroes all look the same when they’re not wearing their masks.

Big Hero 6 is set in the lightly futuristic city of San Fransokyo, a place born from an over-caffeinated otaku’s fever dream of what the Bay Area should look like. It’s basically San Francisco, but the Golden Gate Bridge is topped off with the orange toriis that identify Shinto shrines, the downtown area is an exact replica of Tokyo’s Akihabara electronics district, and everyone—even the black character voiced by Damon Wayans, Jr.—has a name that points towards how Japanese culture has permeated the western world (Wayans plays “Wasabi”). In that light, it’s fitting that the film’s hero is a Japanese-American teenager, and even more fitting that he’s named Hiro (voiced by HAPA Ryan Potter). 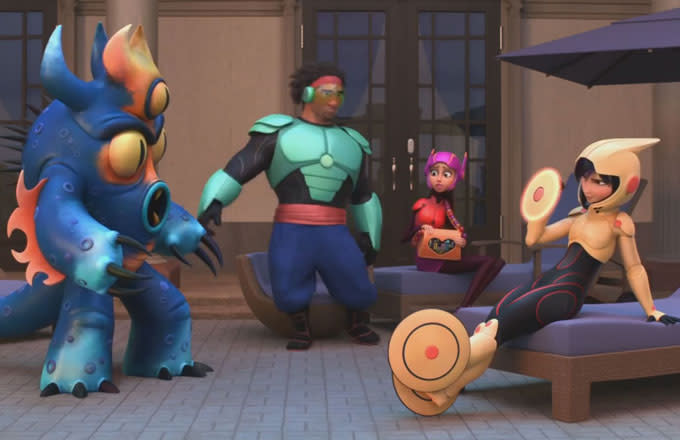 An orphan who lives with his older brother Tadashi (voiced by Daniel Henney) in the apartment above their aunt’s bakery, the 14-year-old Hiro is both a robotics prodigy and a juvenile delinquent, spending his nights hustling people at underground robot fighting matches. More like Anti-Hiro, am I right? Anyway, Hiro reveres his similarly brilliant older brother, who’s advancing the sciences as a student at San Fransokyo’s Institute of Technology, but struggles to apply his genius towards similarly productive ends. After visiting SFIT and meeting all of Tadashi’s lovably wacky colleagues, however, Hiro has a change of heart and decides to apply. But, faster than you can say "legacy," Hiro’s older brother is burned to death in a mysterious fire caused by a supervillain wearing a kabuki mask. Hiro is displeased by this development. Fortunately, Tadashi leaves behind the perfect thing to console a sad young boy: a prototype of his latest invention, an inflatable healthcare companion named Baymax.

Baymax (brilliantly voiced by 30 Rock actor Scott Adsit) is a giant marshmallow who looks like what might happen if EVE was impregnated by the Michelin Man. Programmed to heal—an amusingly clever riff on the age-old trope of robots being programmed to love—Baymax is an immediately compelling comic foil for Hiro, even if their relationship ultimately congeals into the sappy leftovers of better movies like The Iron Giant. Alas, Big Hero 6 isn’t a buddy comedy, it’s an origin story, and its flourishes are the only thing that set it apart from all the rest.

When the villain, who’s name might as well be “P.H.D. Ock”, begins to wreak some havoc, it’s up to Hiro, Beymax, and Tadashi’s ragtag group of friends to band together and save San Fransokyo. Each member of the team finds their crime-fighting identity by weaponizing the fruits of their scientific research, but the only memorable contribution is made by SFIT’s nitwit mascot, Fred (T.J. Miller). A surprisingly nuanced character, Fred is a kaiju-obsessed doofus whose affinity for wearing a Godzilla-ish costume probably offers all sorts of fun places to hide his weed (the weed is in the subtext, but everyone knows that subtext weed causes a much stronger high). In a film that aggressively adheres to the paint-by-numbers plotting that has made Marvel movies so interchangeable, it’s Fred who gives Big Hero 6 a heartbeat of its own, his delight at the pan-cultural chaos around him growing increasingly palpable. If Fred, Baymax, Hiro, and the rest may not have what it takes to save the world, they at least have the power to make it feel a little better.