What We Do in the Shadows

Vampires have got to ask themselves: How do you keep things fresh when you’ve been alive for centuries? Is it worthwhile to adapt? Recently, some hip cats have been exploring these dusty coffins with great aplomb. Earlier this year, Jim Jarmusch pressed down on a melancholic fuzz pedal for Only Lovers Left Alive. Now Jemaine Clement, one half of the "almost award-winning fourth-most-popular folk duo in New Zealand," Flight of the Conchords, takes a stab at it, with a communal-living vampire comedy. And aside from the laughs, of which there are many, What We Do in the Shadows also possesses a warm, still beating heart.

For Shadows, Clement and fellow co-director, co-star, and co-writer Taika Waititi use the increasingly overused mockumentary aesthetic. But the film becomes less interview-based as it goes along, and even includes a pretty fab monster fight.

The documentary crew is there to record for a year, leading up to the annual societal meeting of the undead: witches, vampires, and zombies of New Zealand. The subjects are four vampire flat-mates, who’ve known each other for a few centuries, whom reside in Wellington, New Zealand. Three, Vladislav (Clement), Viago (Waititi), and Deacon (Jonathan Brugh) still favor the Victorian-era puffy shirt. The fourth, 8,000 year old Petyr (Ben Fransham) has rat teeth, long fingernails, and essentially looks like an 8,000 year-old Max Schreck, the original Nosferatu. Let alone their wardrobe (duh, vampires can’t look at themselves in a mirror), they’ve not updated technologically alongside their neighboring society. 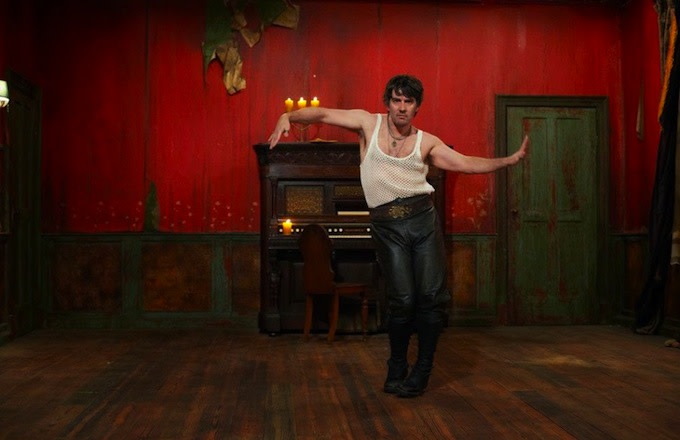 When Petyr turns a sacrificial guest, Nick (Cori Gonzalez-Macuer), into a vampire, they all must teach him the proper ways of their brethren. But they do get a little in return, and that’s Nick’s friend Stu (Stuart Rutherford), an expressionless, down to hang, and seen-not-heard computer programmer who introduces them to Google, Skype, and television. Stu becomes far more popular than Nick.

What We Do in the Shadows has a series of great gags including mirror games, a rivalry with the local werewolves, Stu being continuously laid-back about the otherworldly, and the empty efforts of attempting to keep the house clean while four vampires all have to kill on a weekly basis. But what makes Shadows successful is the softy nature of the main trio as they attempt compromises for co-existence (Petyr is most frequently slumbering; he is 8,000 years old after all). Living with people is hard. Imagine doing it for centuries.

The closeness between the 'mates is both a blessing and, movie-wise, a bit of a hindrance. Though it’s an enjoyable comedy, there’s very little structure. You can’t help but think that this would be a great TV series. The first hour feels like a TV sketch series pilot that, stupidly, wasn’t picked up; so then everything gets wrapped up with some movie climaxes. I suppose I’m damning it with other medium praise, but What We Do in the Shadows is a funny movie that I wish I could keep tuning into on a regular basis. Because as fun as it is, although Shadows parallels ideas from revisionist vampire movies and puts them into a situational comedy, it never really evolves into a film.

Brian Formo’s favorite vampire is the leather-clad cowboy played by Bill Paxton in Near Dark; you can find more of his others here.