If you go into Inherent Vice not expecting to understand everything on first viewing, you might have a blast. If you’re expecting to try to connect all the characters, corporations, and cults together, you’re going to fall behind in the narrative and come away with a few favorite scenes. As the centerpiece presentation at the AFI Film Festival, it appears that Warner Brothers knows you’ll need a second viewing: they handed out a handsome commemorative booklet that explained who everyone was, via descriptions from Thomas Pynchon’s book.

Like my attempts to read Pynchon (who’s a satirical writer of epic proportions; pick-up Gravity’s Rainbow, but also pick up the separate reader’s guide), I fell behind. I did come away with some favorite scenes, but I’ll need that booklet to learn how to inhale Paul Thomas Anderson’s (There Will Be Blood, Boogie Nights, The Master) most recent work. Whenever I choose to roll it again. Is it a gateway drug? A farce majeure? Or a mess? My first contact was not a high—mostly I just got dizzy.

A basic story outline would say: Doc Sportello (Joaquin Phoenix) is a private detective who tokes a lot of green. His ex-lady, Shasta (Katherine Waterston) shows up like out of a dream, but she’s distant and scared. Shasta’s new squeeze is a billionaire land-development tycoon, Mickey Wolfmann, (Eric Roberts); Wolfmann’s wife (Serena Scott Thomas) is trying to convince Shasta, as the mistress, to cash in with her on a plot to commit Wolfmann into an asylum and share Wolfmann’s wealth before he decides to give it all away because he has an epiphany that people aren’t meant to pay rent. Shasta goes missing, and Sportello’s other clients (Michael Kenneth Williams, Jena Malone, retired porn star Belladonna, here credited as Michelle Sinclair) all hire him for deeds that revolve around other people who’ve done misdeeds in Wolfmann’s empire.

It’s 1970. It’s southern California. It’s the death rattle of counter-culture, but Sportello is still raging. California being the end of America, it’s become a place where both billionaires and beach bums alike are fighting different fights against recognizing the Nixon-era American decline. That is, by shooting heroin, strumming guitars, joining Nazi biker gangs, and creating overpriced daycare centers they term rehab—y’know, centering themselves. 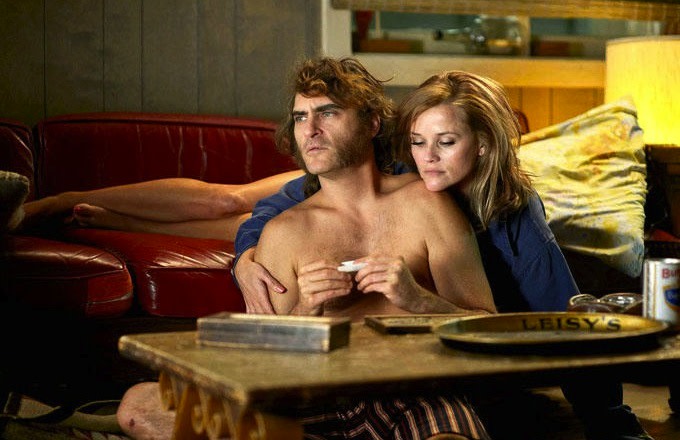 The film plays like a crazy comic strip that introduces an idea in one three-panel section, and then introduces something entirely different in the next installment. Somehow, by dropping a corporate McGuffin called "The Golden Fang," which is sometimes a tax shelter for dentists, dope dealers, and rehabilitation centers, and sometimes it’s a boat that brings illicit cargo from overseas, all these panels become connected. Well, they're supposed to. But Owen Wilson, Benicio Del Toro, Reese Witherspoon all deliver separate truths (and some pizza and tequila zombies) to assist Sportello.

Anderson’s last two films, There Will Be Blood and The Master, were portraits of power dynamics. In Blood you had the capitalist oilman versus the power-starved preacher. In The Master, there was the power-starved philosopher who tries to contain the animalistic spirit of a societal defector. You can feel Anderson attempting to semi-structure Inherent Vice around a flat-top cop named Bigfoot Bjornsen (Josh Brolin) feels threatened by relying on Sportello’s intel. But committed as Brolin is in maintaining a square jaw, this power dynamic never feels anything other than cartoonish.

And really, that's what this is: you can watch Inherent Vice as a cartoon. On first viewing my favorite animated characters were Hong Chau as a concerned pussy parlor performer who first tips Sportello on The Golden Fang, Michael K. Williams as a black ex-con trying to track down a former Nazi inmate who, inexplicably, did him some solids in the can, and Martin Short as a coked-out dentist.

As for the larger characters, Phoenix, as always, is superb. He’s able to communicate equally with eye and lip gestures as much as he’s able to with dialogue, which is apt because he’s usually blitzed. Waterston is a great find: seductive and free, with a fun Ouija board flashback. But to Sportello, Shasta (frustratingly) remains mysterious to the end. More constant than the sprawling cast of who-knows-when-you’ll-see-them-again is the expert photography from Robert Elswit, music from Jonny Greenwood, and costumes by Mark Bridges.

All told, I'd turn on a rerun. Maybe get blotto and double-feature it with some Ralph Bashki cartoons (Heavy Metal, Fritz the Cat) to get in the proper headspace. But I can't guarantee it'll get any better.

Brian Formo is a contributing writer. He tweets here.

Review: The Year's Best Movie So Far, "The Master" Is A Triumph Of Grandiose Yet Intimate Storytelling