When I say I buy everything on Amazon, I mean it. I'm not just talking books (Kindle or otherwise), but kitchenware, electronics, and, sometimes, even non-perishable food items (hey, kosher salt). It pains me to admit it, but I have been known to purchase paper towels from Mr. Bezos, which come to my door via cardboard box surrounded by crumpled packing material, apparently to keep them from breaking. So, considering how much of my life is already Amazon-based, it makes sense that I would consume my new favorite "television" show from the same place I buy my sponges. Well, that's what Amazon hopes anyway. Still, I can't help but worry that Transparent, Amazon Prime's latest foray into the streaming world, might not find the audience it deserves. And that's a shame, because this show is better than any immersion blender you might drunkenly buy.

At face value the series is another quirky domestic ensemble, along the lines of Modern Family or, yes, Arrested Development—a show that it shares both a star (Jeffrey Tambor) and streaming model with. Not to disparage those shows (I'm a huge Arrested Development fan), but Transparent is nothing like them. Rather than zany comedy, it's a dark, often uncomfortably intimate look into one family's deepest secrets. The hook, that Tambor's character is transitioning from a man to a woman, is just one part of what makes the show interesting. (Albeit a part that could begin a sea change in America's view of the trans community.) Creator Jill Soloway, best known for her work on Six Feet Under and Afternoon Delight​, treats every character with dignity, even as they spiral dangerously close to oblivion. Did I mention that it's also very funny? It is. Read on as Complex Pop Culture Editor Tara Aquino and I chat about the show's myriad charms, phenomenal cast, and why it just might be the best thing on TV this year.

Tara: I keep trying to convince my friends to sign up for Amazon Prime just to see Transparent because it's such an important show in so many ways, especially in the way it talks about trans people, but it's hard for me to sell it to them. Any way I describe it makes it sound like just another dysfunctional family dramedy. It's the kind of rare show that has to be experienced to be believed.

Nathan: Couldn't agree more. So, for people who haven't seen it (which I think is going to be most of the people reading this), let's just try our best to characterize it. But first, let me say straight out of the gate, that this is probably the best and most ambitious show of year. That it does this within the quiet context of a quirky half-hour comedy is all the more amazing. The premise—that three children in an affluent Jewish family have just learned that their father is going to transition to be become a woman—just sells the show short. Sure, it's a show about a trans person's decision to transition. But really, show about one family's deepest insecurities, and it lays them all on the table in a way I've never quite seen before.

It's just really hard to capture in words how it manages to do that in such a charming, funny, and sad way. 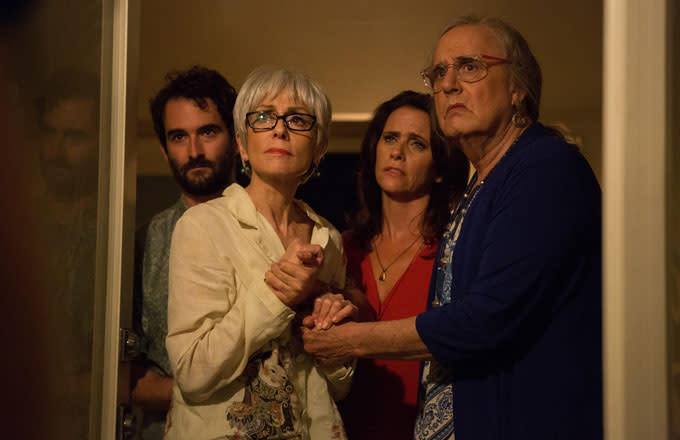 Tara: Right. It's a show about all these deeply flawed people projecting on each other and unwilling to take responsibility for the screw-ups in their life. It feels so realistic that it becomes uncomfortable to watch sometimes because it's easy to recognize yourself in any one of the spoiled, self-centered siblings. They're not selfish or spoiled in the sense that they're sickeningly entitled and uppity. Rather, they just can't see past their own problems and so clearly exist in their old little worlds. That's a testament to the incredible, incredible writing. The writing makes for a full 30 minutes of completely necessary scenes, completely necessary words. Every line is loaded with a double meaning.

That's especially true when the kids are having conversations with or about trans father. They say these little things like "normal" and "magic" in reference to him in conversation but they don't realize how much it hurts. They're all tiptoeing around each other, which feels like a mirror held up to the audience. One of the siblings, I think Gaby Hoffmann's Ali, even says, "I'm afraid of being offensive," when she's talking to her sister about her father. It makes you consider your words more carefully.

Nathan: As the season progresses we start to see just how myopic these people are. And they don't pull punches when it comes to the father, either. There could have been a version of the show where the trans parent is the voice of reason, and the kids struggling to accept it are villainized. But that's not what's happening here. This is a person who is just as confused and sad as his children, who obviously made choices in life that has affected his kids negatively. It's not about blame or good people or bad people, it's just about how family members influence each other—often obliviously. I think that's why it works so well: it's clearly very fond of these people, but it doesn't judge them. It just shows them nakedly (often literally, sometimes not), interacting.

The 30-minute runtime, I think, is key to the show's success. 30-minute dramas (it feels weird to call this a comedy, exactly) are a rarity. Enlightened is the only show off the top of my head that had a similar format. But by the end of each half hour, though, I found myself so totally drained emotionally that I wanted the credits to roll. Even when I was binge-watching the show (I watched all 10 episodes in two days), I felt relieved that I had a break between each half-hour. And that's a compliment!

Tara: Exactly! It's so apparent that the writers know these characters so well and love them all the same. They feel like complete portraits of themselves and no one seems underserved. And right, no one gets away with anything here, which is maybe a nod to the show's title. It's not heavy-handed or preachy. It's presenting a world that exists and asks you personally what to make of it.

Nathan: Speaking of the title: Transparent — I'm embarrassed to say I didn't get the double entendre until a couple shows in. But let's talk about some of the actors individually, because a lot of the success of the show is based on their amazing chemistry with each other. I mean, how great are these performances? Jay Duplass was the biggest surprise for me. Dude is known as a filmmaker, but he has serious acting chops. His screen presence is magnetic. It's hard to think of anyone else pulling that character off. More than anyone on the show, he feels like a person I know, or could know. I'm not sure if Jewish-hipster-A&R-guy-who-is-possibly-a-sex-addict is an archetype, but Duplass' portrayal of Josh is so well drawn that any cookie-cutter comparisons fall apart. Same with Gaby Hoffmann's character. You think she's going to be this manic pixie girl, but she's so much deeper and more troubled than that.

Tara: Gaby Hoffmann plays the confused, neglected rebellious yet crazy-dependent baby of the family so well. Watching her, it's almost tough not to want to play big brother or big sister to her. She keeps making these really bad decisions that as an outsider you know are really bad but to her make complete sense. Watching those flashblacks to the family pre-their parents' divorce, her angsty, stilted character arc feels like a natural progression. With Sarah, she is so much the big sister. Amy Landecker plays the character with so much poise yet also such hidden vulnerability. She's the quintessential soccer mom you'd probably write off as a soccer mom and wouldn't even think to consider she's got any more problems than that. Her husband (played by Rob Huebel) even teases her about being a stay-at-home mom who couldn't possibly have anything to be overwhelmed by. Yet here she is, realizing that she's not just ticking off boxes and living the typical suburban life she's built. Her fun college phases weren't just fun college phases. 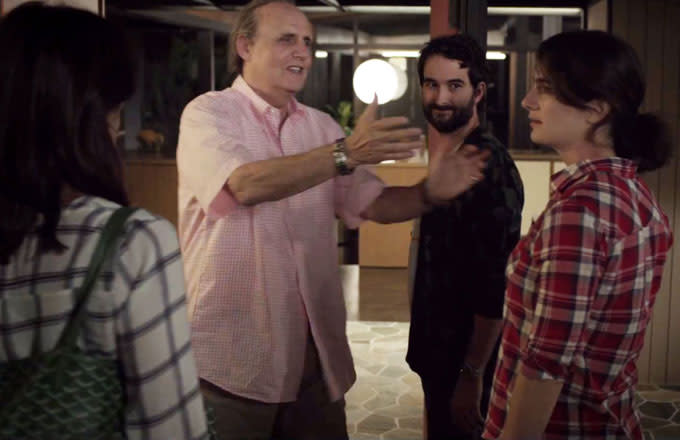 Nathan: And largely, when these characters decide to chase their emotions or whims the world is not kind to them. It's not like, when Amy decides to start an affair, it's this epiphany that will solve her suburban ennui. Most art about White Suburban Unhappiness™ tend to want the characters to chase their dreams. I'm not so sure this show does. Take American Beauty, a movie that did everything it could to justify midlife crisis. Transparent couldn't be more different. It doesn't justify or judge, it just shows what happens when people start to act on their deepest longings or fears. Maybe it's good, maybe it's bad, maybe it's necessary. But mostly it means that things will get really messy. When Amy's husband freaks out at a family dinner because of all the newly-altered gender dynamics he doesn't come off as a bigot, he comes off as a dad whose whole world has been upturned. The show's only agenda is that it wants to humanize these people, and possibly point out that everyone has their kinks. (I think the wonderful mother character Judith Light plays says something to that effect.)

But changing the subject, given how unusual the show and format is, can it find an audience? If it was on HBO, I'd be predicting that it wins all the Emmys ever. It's the best thing on TV, but are people going to watch it?

Tara: That dinner scene and not villainizing Amy's husband is so crucial. There is no antagonist on this show, everyone's biggest roadblock is themselves essentially. I gotta bring up one thing before we wrap though: the scene where Amy and her new girlfriend are struggling to talk to their kids, tripping over their words, about Mort being trans is something I haven't seen before, and I applaud them for bringing that conversation to the forefront. It is hard, it is awkward. I've been there, and I still can't pull it off because I don't have an example to follow, you know? I don't know if it's going to find an audience unless it finds another service to partner up with. Who thinks to go to Amazon Prime for TV? People are going to watch it if it's more accessible, and really, who has a friend they can borrow their Amazon Prime password off of? It needs to do what The Knick did and offer its first 3 episodes to HBO Go or something. But that's wishful thinking. It really deserves all the freaking Emmys.

Nathan: Amen to that, but I don't think that's Amazon's game. They want to be a Netflix or a Hulu or even an HBO on their own. And honestly, this show is better than anything Netflix has ever made (sorry Orange is the New Black fans—it's true.) If they can get the eyeballs on this and get the nominations they deserve, maybe Amazon can actually do it. Whatever you need to do, though, you owe it to yourself to see this show. Hey, if Amazon Prime gives you this show AND free shipping, that sounds like a good deal to me.