The last time you saw Ben Feldman, he was Michael Ginsberg, handing Peggy Olsen his severed nipple after losing his mind over a newly installed computer on AMC’s Mad Men. If you thought that gruesome nip-slip was freaky, Feldman’s got something even creepier for you.

In the new found-footage horror movie As Above/So Below (in theaters this Friday, August 29), Feldman heads deep into the bone-filled miles-long underground cemetery known as the Catacombs of Paris; instead of possibly malevolent word-processors, though, he and his co-stars run into all kinds of supernatural badness. They’re explorers searching for the storied Philosopher’s Stone, once obsessed over by alchemist Nicolas Flamel, and, little do they know, they’re en route straight into the bowels of Lucifer’s playground.

Feldman plays George, a brainy guy living in Paris whose ability to translate ancient languages (e.g., Aramaic) and hieroglyphics makes him a valuable asset for tough-gal heroine Scarlet Marlowe’s (Perdita Weeks) subterranean investigation. George, the smart man that he is, wants nothing to do with the Catacombs, though, of course, he ends up there within them and fighting for his life. Feldman, however, couldn’t wait to enter the Catacombs and shoot As Above/So Below on location. In this chat, the actor explains why director John Erick Dowdle’s film isn’t like Hollywood’s recent string of “dumb” horror flicks, namely because of its authentic Parisian disposition.

Guilty admission: Before hearing about As Above/So Below, I wasn’t even aware of the Paris Catacombs. Were you aware of their long, crazy history prior to working on this movie?
I knew they existed but that’s pretty much the extent of it. When I found out I was going to do the movie, I Googled “Paris Catacombs” and the images I got back were just insane. I thought, oh my god, this is going to be so much. While doing it, I learned all about the history of alchemy, and Nicolas Flamel, and 18th century France, in general, and where the catacombs’ quarries go and why they’re there. I didn’t even realize the limestone used to make the Notre Dame Cathedral came from those quarries. All of that information came to me as we were shooting.

Was that part of the project’s appeal?
It was 100% the appeal. It was why I wanted to do it. That’s what I liked so much about this movie—it wasn’t just me running around and screaming and being scared of, like, ghosts. Everything that’s referenced in this movie, you can look up online, and there are books about it. It’s all based in either historical facts or folklore. I love that this movie can exist outside of this movie—that’s what so cool to me. You see a horror movie and it’s like, “Yeah, that was scary for those two hours I was sitting in the theater,” but it doesn’t remain scary much longer after that. Here, you can continue to be scared. You can go home, look all of this stuff up, and say, “Holy shit!” One could argue that the Philosopher’s Stone actually is burned somewhere underneath Paris. It’s really cool.

There’s so much history within this movie, and that’s not often the case with horror movies. I think horror movies are getting dumber and dumber, so it’s nice to see something that’s a little smarter. 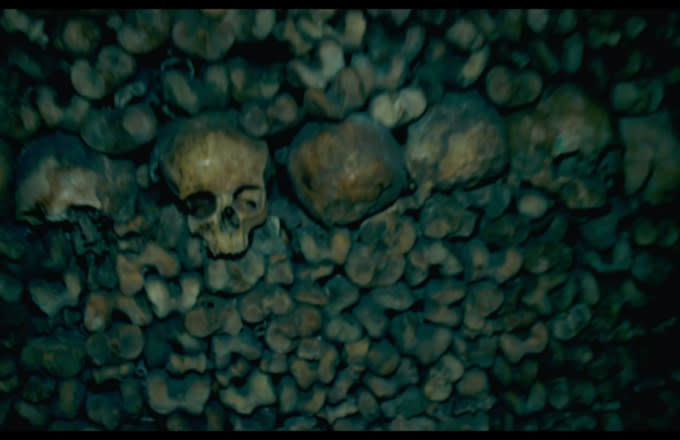 And because of that, it often asks a lot of the viewer to keep up with what the characters are talking about, all of this jargon about Flamel, Copernicus, and celestial bodies. There seems to be a certain amount of trust from you and the filmmakers that the audience will keep up and play along with all of that.
From the horror movie demographic, yeah, definitely. A lot of times those movies just phone it in. Often, American audiences are underestimated by producers and movie studios. They often think we’re dumber than we are. It’s nice that the Dowdle brothers came along and said, “That’s not true, people are going to dig this. They’re going to dig the nerdy aspect of this movie.”

One thing I really appreciate about As Above/So Below is that its characters aren’t just a bunch of idiots who’ve gotten themselves into a really bad situation, which is pretty much always the case in found-footage horror movies. The characters here are well-educated, very qualified people who aren’t out of their elements in the catacombs, at least not until the scary stuff starts happening.
Yeah, it’s usually a bunch of dumbass kids making the wrong moves and constantly fucking up. The characters in our movie are in the Catacombs for a reason. Someone else was saying to me earlier, “It’s not a movie where the characters keep making stupid decisions—for the most part, they’re making the smartest decisions they could make in their particular situation.” There’s no one who’s like, “Did I just see a ghost in that window? Let’s all go in this house and find out!” [Laughs.] They’re there for a real purpose and searching for a real thing, and I think that’s what’s really cool about it.

But your character does have an element of “I don’t want to be here.”
Yeah, he gets stuck there and gets roped into the situation accidentally, but it’s fun. It’s fun being the skeptic, because it’s certainly what I would’ve been if this really were happening.

So the character is a lot like you, then?
For sure. In fact, the entire time we were shooting, I wanted to go as far as I could with that attitude. It probably got annoying to the Dowdles when we were shooting it, because I would constantly say things like, “Can’t he say, ’Screw you, that’s bullshit’?” I loved being the realist about the entire thing.

Did they have any resistance towards that?
They didn’t have that much pullback. A lot of times they were just like, “We don’t have time to sit here and listen to you ramble. Stop being a narcissistic actor. The scene isn’t about you.” [Laughs.] And then I would just say, “OK, fine.”

There’s a great sense of exploration and adventure to As Above/So Below that works even if you’re not a fan of horror movies. It’s a nice mix of genres.
Yeah, it’s a treasure hunt. It’s one of those Dan Brown, Indiana Jones kind of vibes, and, also, the scares and shocks aren’t gratuitous, which I think happens a lot in modern horror movies. There’s a lot of “Boo!” and “This is an awful thing!” and “Here’s another awful thing!” In this movie, there’s a lot more drawn-out tension, a lot more, “Holy crap, what’s about to happen?” You’re sitting there tense, going, “Oh, god, something’s about to happen in any minute,” and that’s what I really liked about this. 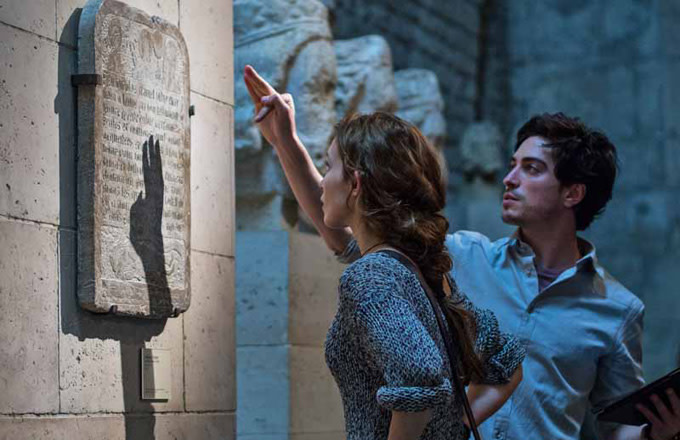 Do you read a lot of scripts in the horror genre?
This is No. 3 for me, and I’m not a giant horror fan at all. So, no, I don’t at all. In fact, the last time I was in a horror movie, the Friday the 13th remake, I was like, “OK, I’m done with these. I don’t need to be in another one.” And then this came along and it was different. I love treasure hunt movies, so it tapped into that nerdy aspect of my interests. It’s not a horror movie—it’s more of an adventure rather than just a haunted goose hunt.

And even when it becomes a horror movie, it’s unique in that it’s all shot in the actual Catacombs themselves. That lends a strong authenticity to everything.
Yeah, we spent a lot of time in caves underground in Paris, and it was really fun. It was uncomfortable. It was the total opposite of the luxuries that actors and film crews usually have grown accustomed to, but that made it interesting and different. At no point were we bored.

I was only in the Catacombs for about 30-40 minutes earlier today, and at a certain point I said to myself, “How the hell would I ever get out of here if not for the tour guide?”
[Laughs.] Seriously, it’s this insane, endless labyrinth. Everyone’s like, “What was the scariest thing about shooting this movie?” And there was nothing really other than the fear that you might get lost. If I’d ever stopped following someone and went in a different direction, I could’ve kept walking for miles in this underground labyrinth and never get out.

Without giving anything away, As Above/So Below ends very atypically for a horror movie. I won’t say who, but more people ultimately make it out of the Catacombs than one might expect. Usually horror movies, especially found-footage ones, end with that one last shock or kill, and send viewers out on a bleak note, but not this one. Did that resonate with you when you first read it?
Definitely, because this movie isn’t about watching death and blood. You actually start to care about the characters. Also, it’s kind of this love letter to Paris in this sort of weird, Goth-y way. So it’s really cool to see that last shot, where the remaining characters climb out and the camera is upside down and then turns right-side up and you’ve got Notre Dame in the background. It’s this big, towering, amazing, and ancient presence that was from this limestone that was blasted out of the Catacombs’ quarries in the first place. I really like that moment a lot.

I think anybody’s who’s ever traveled to Paris or any sort of older European city will get caught up in the romance of the history and the ghosts you;’re surrounded by everyday. I live in Los Angeles, which is the youngest place—there’s no history to Los Angeles. Everything’s fake. So it’s really exciting to be in a place like Paris where there’s so much history, and it’s awesome to have a horror movie that takes full advantage of that. Very few cities are as surrounded by ghosts as Paris is.

Matt Barone is a Complex senior staff writer who challenges you to name Ben Feldman's previous found-footage genre movie role. Tweet your answers at him here.

The Scariest Movies of All Time

Interview: "As Above/So Below" Star Perdita Is Ready to Become Horror's Own Lara Croft