If you miss Aaron Paul playing Jesse Pinkman in Breaking Bad, his latest project, BoJack Horseman, might help ease your pain (until he hopefully makes a cameo in Better Call Saul.) Paul voices Todd Chavez, a scruffy slacker who plays sidekick to the show's title character, a washed-up talking horse who's trying to break back into the acting scene. Imagine BoJack as a hyper-sexual Mr. Ed, if Mr. Ed could walk on two legs and dress like he's going through a mid-life crisis. This isn't a cartoon for kids—it looks and feels like it belongs on Adult Swim's late-night schedule. Except it's not playing there, or on Fox, or even HBO. BoJack Horseman joins the ranks of Orange Is the New Black and House of Cards as a Netflix original, and all 12 episodes of the first season will be available August 22.

Paul, who's also an executive producer, isn't the only star on the show: Will Arnett voices BoJack; Community and Mad Men star Alison Brie voices Diane, the ghostwriter in charge of writing BoJack's autobiography that'll be his best shot at getting back his stardom; and Amy Sedaris from Strangers With Candy plays BoJack's assistant—a bipedal talking cat who sleeps with him. The show's early episodes feature big name guest stars such as Keith Olbermann and Patton Oswalt.

You not only voice a character on the show but also serve as an executive producer. That's a lot on your plate. What's it like behind the scenes?
Aaron: I was the first person to get attached to this, and when I attached myself to it, it was only a 10 page treatment. We didn’t have a studio or a network behind us, it was just a couple of guys with a dream. They came to me with this incredible story and I read the first 10 pages and I absolutely loved it—I loved the story, I loved the world they lived in, the characters, and they asked if I wanted to develop the show with them, and I said of course, let’s do it. So we just reached out to our dream cast and one by one everyone just started saying yes.

What’s really different about being an executive producer is that you kind of have a say. When we were talking about where we wanted to pitch it, the first thing we all thought of was “let’s pitch it to Netflix.” I think they would really dig it. So we pitched it to Netflix, and they picked us up pretty instantly. So, you just have more of a voice then just a voice in the show, you have a say and drive in your ideas and help guide where the show is going to go.

When I was a kid growing up, I used to watch 'DuckTales', I was obsessed with that show, you know what I mean? I always thought it would be super fun to be in a cartoon.

Is being on an animated show something you’ve wanted for awhile?
Yeah, I think we all have, right? When I was a kid growing up, I used to watch  DuckTales . I was obsessed with that show, you know what I mean? I always thought it would be super fun to be in a cartoon. Then after moving to Los Angeles and seeing these young actors on these TV shows—like Seth Green and Mila Kunis in Family Guy—I was just thinking, “wow, this is so great that they’re doing that as well.” So I’ve always kind of been on the search for something that would be for me, and this kind of just fell into my lap and I had to dive at the opportunity.

Netflix is quickly becoming a big time competitor to HBO and the television industry, and practically gave birth to the whole concept of "binge-watching," a lot of that thanks to Breaking Bad. What went into the decision of going with them over traditional networks?
I don’t know, I just think what Netflix is doing is the future. That’s just what people are doing, how people are watching television right now: it’s binge watching. And there’s a lot of amazing networks out there, obviously AMC, HBO, really the list is endless, but we just decided that Netflix is going to be the first one that we chase after. Throughout the years I’ve just become friendly with the people who work over there and make the decisions. That’s who we had our meeting with and they gave us the green light. 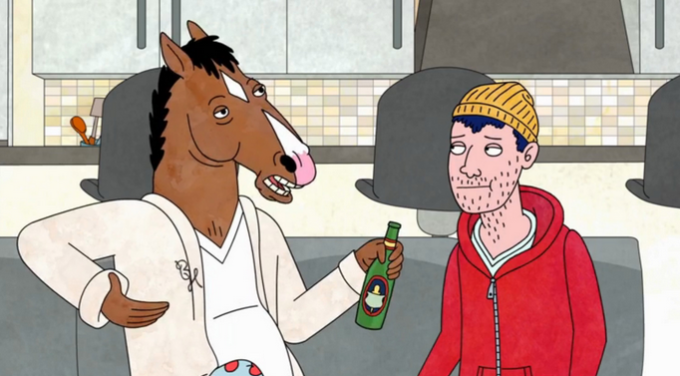 What are the differences you've experienced between working with Netflix and traditional television? This is Netflix's first shot at an animated comedy.
It’s a little different. First of all, this is an animated series, and I’ve never had this opportunity before, so I can’t really compare it to the other animated series on Fox or other networks. But I love everyone over at Netflix. They’re all fantastic and an absolute joy to work with. I’ve been blessed that I haven’t really ran into any of those horror stories that you sometimes hear about. It’s always been so great.

you can show up to work at 10 in the morning and still be in your pajamas with a cup of coffee in your hand and don’t have to worry about going through hair and makeup and all of that, or worry about memorizing your lines.

BoJack is a talking horse that has sex with almost anything that will let him. There's an airport named after Air Bud. The show teeters both into the weird and the wild. What has working on an animated show opened up for you artistically?
The only notes that Netflix would give us on scripts would be, “you know what, just go bigger, go crazier, this is great—let’s just keep going with it.” So we would do that, and it’s just so much more fun. At first I was a little uncomfortable going into the sound booth and making up different voices and trying out different things. I just wasn’t used to it. But we hammered through the first season pretty quickly. I just had such an incredible time with it.

You're in the booth instead of being in front of the camera. It must be a little strange becoming Todd in there, even though he's a lot like Jesse.
It’s great, Todd is a fun loving charismatic guy who just wants everyone around him to be happy. And when I’m playing him in the sound booth, I kind of feel that energy living through me. But it’s great because you can go to work and do whatever you want. You can show up to work at 10 in the morning and still be in your pajamas with a cup of coffee in your hand and don’t have to worry about going through hair and makeup and all of that, or worry about memorizing your lines. You have to understand where your character is at and where the story is at, but you’re just in the sound booth having fun, just going off on tangents and just rolling with it. We’re always just constantly laughing every single day in the booth, it’s great.