In the utterly incoherent sci-fi/action film Lucy, Scarlett Johansson nearly gets eaten by a velociraptor. Rendered with wonky CGI, it might as well be an escapee from Turok: Dinosaur Hunter.

Not what you've been expecting from what's being sold as a Scarlett-Johansson-kicks-ass joyride in its commercials, huh? Well, how about this—in Lucy, Scarlett Johansson also talks to her fictional mother over the phone and tells her that she can "taste the milk from your breasts" with a straight face that, one would hope, is hiding the sly actress' awareness that she's delivering a silly line of dialogue in an altogether ludicrous movie. Because there's no way Johansson could have read Lucy's script and signed on for anything pertaining to intelligence or cutting-edge storytelling. Having recently starred in Jonathan Glazer's exceptionally provocative indie Under the Skin, she's proven to have superlative taste when it comes to selecting genre curveballs. Lucy, while it probably sounded like a blast on paper, is a Wiffle-ball-like curve thrown by past-his-prime pitcher in Besson, who once made memorable pics like The Professional (1994) and The Fifth Element (1997) but lately has been too busy producing down-the-middle softballs like Liam Neeson's Taken movies to recapture his older specialness.

In Johansson, thankfully, Besson has a movie star charismatic and gifted enough to elevate his schlock. Lucy is the kind of goofy film that doesn't deserve any more than a straight-to-DVD release but, thanks to Johansson's bankable A-list presence, it's a wide summer release. As those commercials have suggested, it's essentially Bradley Cooper's Limitless ramped up to 11 aesthetically and lobotomized logically. Johansson's character starts off as a collegiate party girl living in Taipei and dating a drug-running deadbeat. One day, after a long night of intoxicated clubbing, her boyfriend handcuffs her arm to a briefcase against her will, and makes her do his dirty work by trying to bring the case and its mysterious cargo up to a Chinese criminal overlord (played by the original Oldboy himself, Min-sik Choi). But the plan goes haywire fast, and, following beaucoup carnage, Lucy wakes up with a pouch full of blue synthetic drugs in her stomach and brainpower that's steadily increasing well beyond the 10% said to be used by human beings. 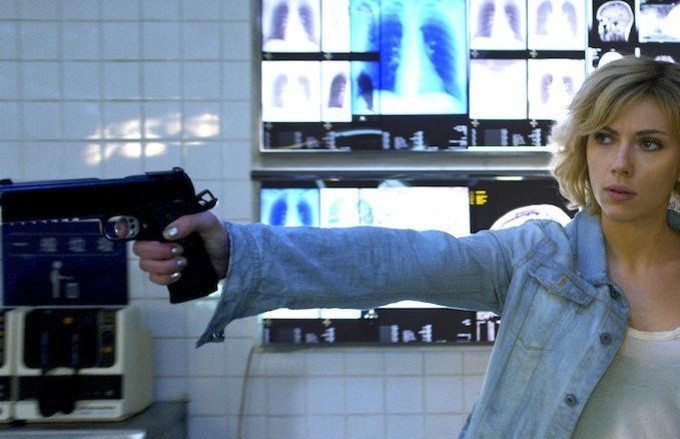 Which, disappointing anyone who's been anticipating Scarlett Johansson's very own Taken, turns her into, basically, a god. In Besson's hyper-reality, unlocking all of one's mental capacity transforms them into Dr. Manhattan minus the Blue Man Group likeness. Lucy can hack into electronic devices, type on multiple laptops like the world's most read unruly coke head, read people's minds, lift Chinese gangsters into the air without touching them, and perform other superhuman functions that Lucy's overwrought exposition and pseudo-intellectual jargon work extra hard to explain. The talkiness causes derailment; as fun as a Parisian gunfight involving a rocket launcher might be in a different movie, in Lucy, while surrounded by Besson's excessive psychobabble, it's too little, too late.

The chatter is occasionally spoken by a just-happy-to-be-here Morgan Freeman, playing a Paris-based brain studies expert, but it's mostly Johansson who's stuck voicing the nonsense. With an unflinchingly robotic, deer-in-headlights, cocaine-addict stare, she spends the latter half of Lucy looking as if she's just watched Under the Skin for the first time and Besson's somehow gotten her to hold that expression longer than any person should. To Johansson's credit, she's able to make the character's ascent into demigod posturing at least reasonably compelling until the point when Besson's script turns her every utterance into nonsensical gobbledygook. Johansson deserves a medal for committing to material that wants to be 2001: A Space Odyssey when it's not even Crank.

In its beginning section, Lucy is claptrap, yes, but wildly heavy-handed and artistically childish claptrap whose disregard for panache makes it enjoyable. Overdosing on National Geographic-ready stock footage, Besson punctuates pre-drug Lucy's run-in with the Chinese mobsters with clips of a cheetah attacking a helpless deer, a hammy maneuver that becomes laughably idiotic once he goes so far as to show a mouse nudging up to cheese on a trap. It's audaciously moronic, yet being that it happens with Lucy's 15 opening minutes, it's a welcome gauntlet drop, as if to say, "Turn your brain off and bask in the oncoming zaniness." Come time for Lucy to see that aforementioned Jurassic Park: The Video Game reject, though, Besson has dropped the whole thing so far into narrative and visual absurdism that you'll wish he'd tapped into only 10% of his worst impulses.

Matt Barone is a Complex senior staff writer who, like the rest of the world, would've opted for a Black Widow standalone movie instead. He tweets here.