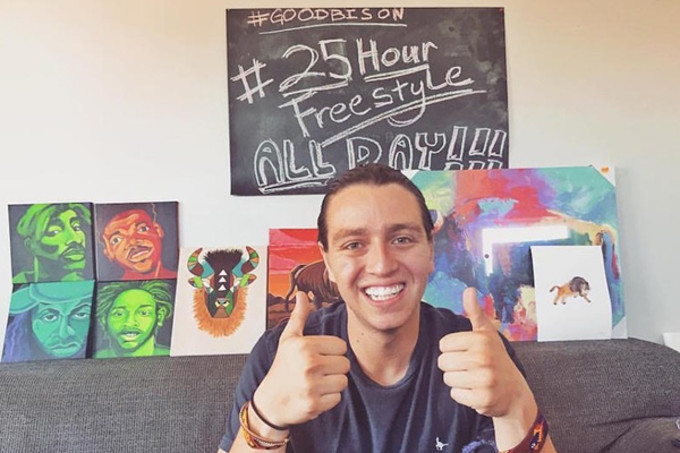 L.A. based, Miami-bred musician Pablo Alvarez recently attempted to break the world record for the longest solo freestyle rap of all time, streaming the entire thing via Facebook Live and YouTube. Starting around 8 p.m. and finishing 9 p.m. the next day, Pablo says that the whole thing “started as a joke.” Speaking with Miami New Times, he said, “It came about from me joking that I could freestyle all day.”

Streaming the world record attempt from his band Good Bison’s Facebook page, he said that interacting with Facebook fans helped him come up with material for his freestyle. “I was incorporating their words into my rhymes. They would throw something at me that they thought I couldn’t rhyme. I was probably given the word ‘orange’ twenty times throughout the day.” The Guinness World Records website lists a team freestyle record of 12 hours and two minutes, and Complex reported back in 2014 that the previous record for a solo freestyle is 16 hours, 31 minutes, and 21 seconds.

Streaming and rapping for almost the entire 25 hours, Alvarez is currently awaiting a response from the Guinness World Records. “Once they respond, I have to just submit proof. I have the entire 25 hours on film, and there were witnesses present the entire time who were keeping track,” he explains. “The interesting thing is the Guinness Book of World Records gives you a five-minute break for every continuous hour of activity. I didn’t take any breaks. I kept going 25 hours straight. I didn’t stop.”

During the 25-hour freestyle, Alvarez drank water, a smoothie, and had a 5-hour energy drink to keep him going past the 20 hour mark. Despite this, he only used the bathroom once during the 25 hour period. Him and his band mates thought up the lengthy freestyle in attempt to promote their latest EP, Buffalo Roots, which they recorded with producer J-Hawk.

Watch snippets of the lengthy freestyle below