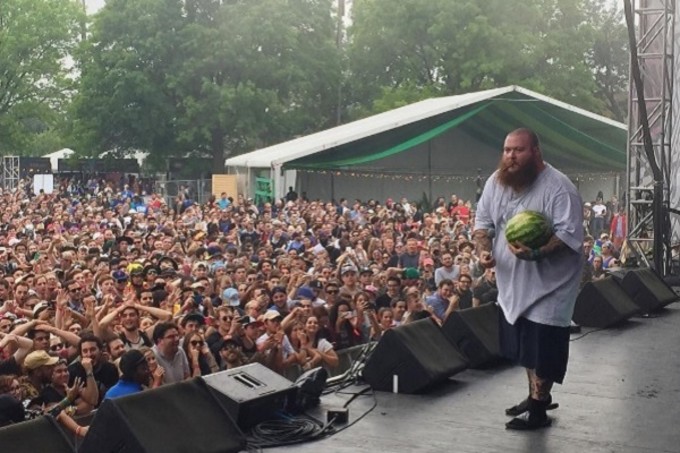 The first time I saw Action Bronson was back in 2012 during House of Vans’ CMJ show. Halfway through the show, my friend turned to me and pointed to the stage. “Is…is Bronson throwing out bags of weed into the audience?” he asked me. And, without ever breaking his flow or stopping to pause the track, Action Bronson was, indeed, tossing his supply to the crowd.

Fast forward to today. In the four years since, Action Bronson has grown into a bigger star. He’s released two mixtapes, an EP, and his debut album, in addition to creating and starring in the food-oriented web series, Fuck, That’s Delicious. With time comes change, and you might expect that his live shows wouldn’t pack that same amount of personality.

But if you’ve been following Action Bronson you’ll know that, luckily, this hasn’t been the case, and it certainly wasn’t the case during his set at this year’s Governors Ball festival.

At exactly 3:45pm, Action Bronson took over the Big Apple stage, bringing an energy that is so necessary for that mid-afternoon window. Instead of merely just running through his hits, he put his signature Bronson spin on the set. Before jumping into “Actin Crazy,” he smashed a watermelon a fan gave him on the stage. Towards the end of his set, he rapped with a tray of food in his hand and took bites in between verses. He brought out Big Body Bes and Meyhem Lauren and was just as excited that they were there as the audience. And to close his set, he brought out chef Mario Batali, who was hanging out in the crowd. Tell me another rapper that can pull a guest appearance off like that?

During a day primarily filled with notable rock acts like Beck, Bloc Party, and The Strokes, who mostly stuck to their hits (which there’s nothing wrong with), Bronson gave us more. He brought that excitement and unpredictability that the best festival sets deliver. Whether or not people knew all his songs, they certainly did know that they were having fun. And in a setting that has the potential to be the complete opposite, that’s all you can ask for.