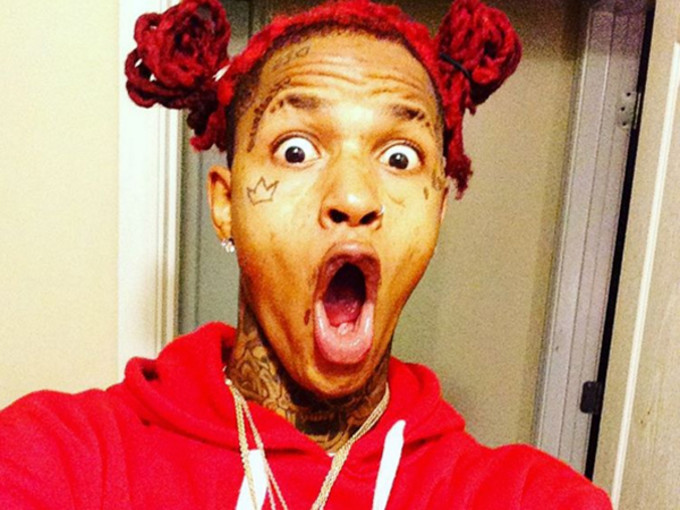 There are qualities that every open-minded Lil Wayne fan can appreciate in Young Thug. When Thug started getting buzz, critics said he was a Weezy rip-off, but over the past years we’ve seen him evolve into one of the most unique artists in popular music. He’s taken some of Wayne’s charisma and unpredictability to the extreme, and although he’s never denied Wayne’s influence, now he’s the one being imitated and influencing other young artists.

The most intriguing of those artists is a rapper from New Orleans named Kyng. The 20-year-old rapper looks, sounds, and dresses a lot like Young Thug. He even trolls like Thugger—he released a project called Slime Season 3 on the same day Thug did, and he says he was just doing to Thug what Thug did to Wayne when he released an album called Barter 6 (before Weezy could put out Tha Carter 6).

Now, many Thug fans are facing a dilemma: do we dismiss Kyng as a Young Thug rip-off? Or is this just an extension of Thug’s DGAF attitude? Is Kyng taking it too far? Or is he just the obvious next step in the accelerated cycle of influence?

Either way, Kyng could care less.

When did you decide to go this route of dropping your own Slime Season 3? When did you start listening to Thug?
Well, I put out a video called “Bloodaz” on YouTube. It took over the internet, everyone was watching it. Everyone was talking, commenting, and posting it. Then DJ Akademiks reposted it, and I guess he trying to make jokes or whatever. He talking about, “This guy might as well drop Slime Season 3, he might drop it before Young Thug.” He took it as a joke, and I was like, “Alright, since you taking it like that, I’m gonna do it.” It was after the video was out, after they started comparing me to Young Thug.

What do you think of Young Thug’s Slime Season 3?
To be honest, I didn’t get a chance to listen to it yet. I heard it only has eight songs, but I’m going to listen to it. I haven’t really got to sit down with it. I know what mine is talking about though, and we putting out a new one out Monday.

I did hear that there was a deluxe edition of your Slime Season 3 on the way.
Yessir! Monday on LiveMixtapes.

How do you feel about the Young Thug comparisons? Are you worried about being known only as a Young Thug lookalike?
I’m just being me, I’m gonna do what I want. Ain’t nobody gonna make me change what I do, but you know, that man is a great person, and he’s rich too. So guess what? If you gonna compare me to somebody who is great and rich, I don’t have no problem with that. As long as you ain’t comparing me to the opposite. I’m gonna do what I been doing before all of this, ain’t nothing gonna change but the money.

So there’s no beef with Thug? That’s what it was starting to seem like online.
People always gonna try and make it sound worse than what it is. It was just comparisons like, “Oh he sounds like this, he sounds like that, he looks like that.” It was never a problem, we not beefing or anything like that.

What impact do you want to make?
Work. Work, work, work. That’s all you gotta do to get to where you wanna go, you gotta work and mastermind. You gotta think, you gotta have a plan. Strategy.

What’s next? Do you plan on making a SoundCloud account? Any upcoming collaborations we should know about?
After we get finished with all of this, we’re gonna start putting singles on SoundCloud. We’re gonna make a new account when we start putting singles out. I’m in New York right now, the collabs are gonna come out, we working though. As soon as we drop the Slime Season 3 deluxe version we’re going to start working on the next project, Royalty. It ain’t gonna ever stop.