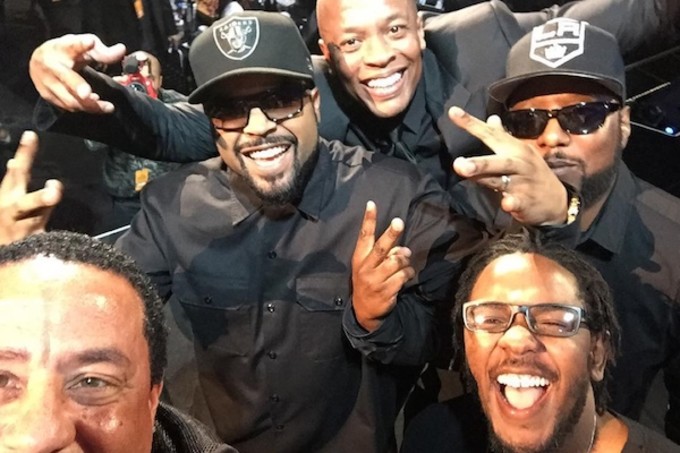 Last night, N.W.A. joined Run-DMC, Grandmaster Flash, Beastie Boys, and Public Enemy as the only hip-hop artists to be welcomed into the Rock and Roll Hall of Fame, and they were inducted by a fellow Compton rapper who is quickly becoming legendary himself: Kendrick Lamar.

During his eight-minute speech, Lamar praised each member of what he called “the world’s most dangerous group”—Dr. Dre, Ice Cube, MC Ren, DJ Yella, and the late Eazy-E—individually, calling Ice Cube a “storytelling genius” and saying he was the “blueprint” for how Lamar approached his debut album, Section.80. He also spoke highly of Dr. Dre, calling him a mentor.

Speaking of the group as a whole, he said, “To be clear, to be very clear, the fact that a famous group can look just like one of us and dress like one of us, talk like one of us, proved to every single kid in the ghetto that you can be successful and still have importance while doing it. That was N.W.A. That was their true message.”

Then N.W.A. took the stage and Dr. Dre spoke first, saying how N.W.A. is proof to kids all over that anything is possible. He also spoke about the group’s origins:

It’s been exactly 30 years since we formed the group N.W.A. Back then, we weren’t thinking about fame or fortune or anything like that. We were just kids in the studio, having fun recording, you know what I mean? These guys right here, these are the first people I had the opportunity to record with before any business was involved. Imagine that: recording with no business involved. And I’m quite sure everybody in the music industry, especially those who make music, understand how precious those times are.

The full ceremony is scheduled to air on HBO at 8 p.m. EST on Saturday, April 30. Watch Kendrick Lamar’s induction speech and N.W.A.’s acceptance speech below, and read the full text of Lamar’s speech via Rolling Stone.

Compton's in the House!! #rockandrollhalloffame