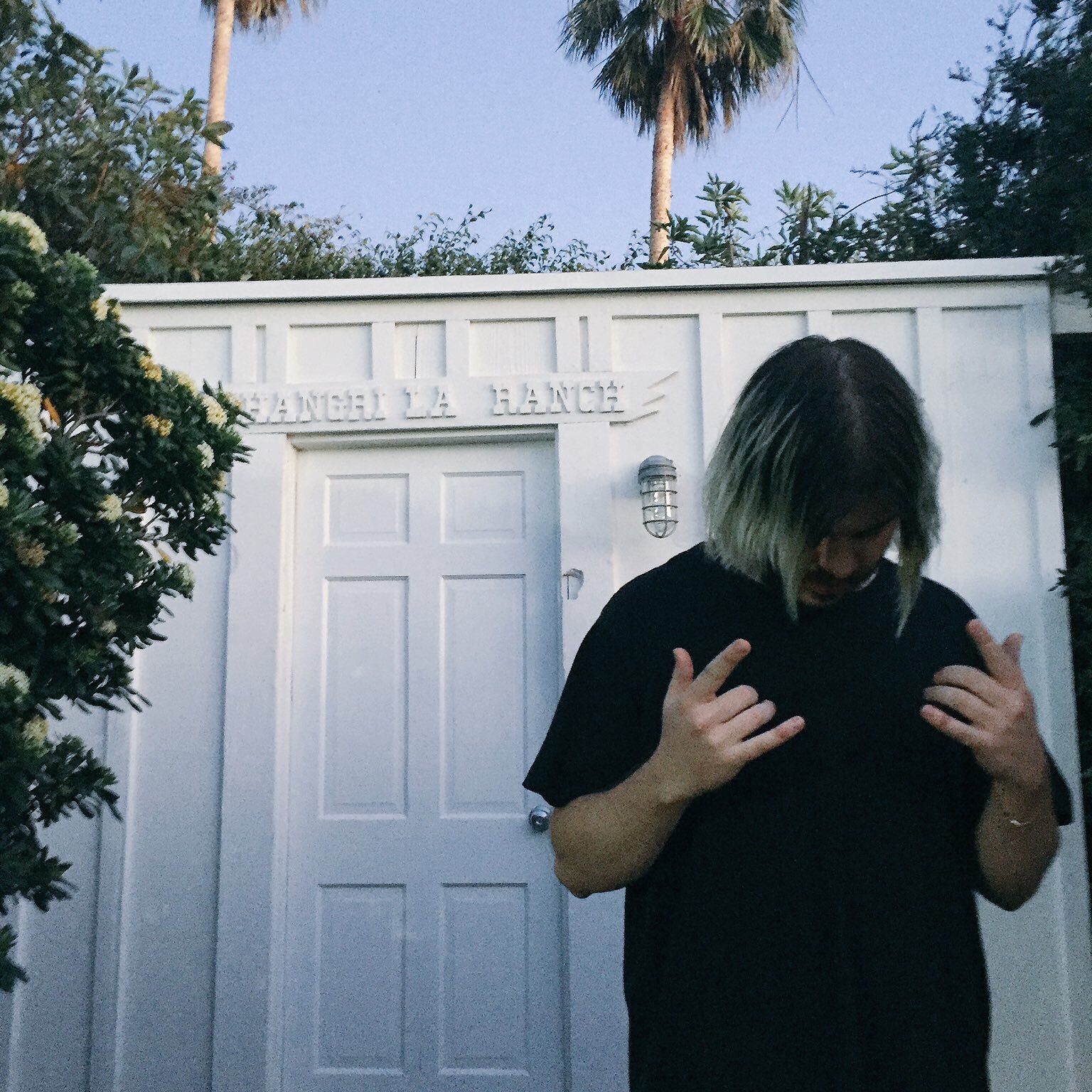 “Do you know this guy lil aaron?” one artist asked in between jotting down lines in a studio session. “He’s one of the best songwriters I’ve ever met.”

“lil aaron is insanely talented. The kid is going to be huge,” an A&R from Atlantic insisted, on a separate occasion.

Weeks later, a talent agent friend brought up the name yet again. “lil aaron? That dude’s a superstar.”

I had heard lil aaron’s name buzzing around conversations with artists and industry friends so often that it was impossible to ignore this kid any longer.

By the way these guys talked about him, I assumed he was some kind of industry-manufactured servant who’d been conditioned by pop music’s hit-making formulas to churn out hits for celebrities. And after months of hearing his name, I still wondered: who the hell is lil aaron?

I learned quickly—especially since this interview was conducted via FaceTime—that lil aaron is hardly a commercial drone. With his green-tinted hair and leopard print boots accompanying a penchant for questioning music industry standards, I’d assume that lil aaron would make any traditional label exec shit his pants. I immediately understood what page we were on: he’s not a fabricated industry plant, but rather the best-kept secret of the music community’s cool kids club.

He’s big on staying around the music world’s misfits, with credits on the best work of Dev, Kiiara, Ro Ransom—the kind of artists who don’t necessarily fit under rigid categories or genres. In fact, lil aaron’s whole ethos revolves around this idea of fluidity; he can switch gears easily as he moves among clients, likes to dips his toes in the other creative roles behind plotting artists’ next moves, and has recently shifted focus from being a full-time songwriter to a more public-facing recording artist.

What makes lil aaron’s appeal so worthy of discussion among industry players, though, is his embrace of honest weirdness. He’s extracting the syrupy aesthetics and grunge-teen anthemic qualities of bedroom rap and shaping them into marketable pop songs (see: “Gucci Umbrella” and “Me”), marrying the bizarre corners of the internet with more mainstream audiences.

It might make a lot of suited-up industry heads uncomfortable, sure, but aaron’s assertion that predictability in pop music is outdated, and that even the most surface level music listeners are catching onto all the corniness, is getting really hard to dismiss. In a sense, lil aaron is representative of a new mentality in music creation—one in which the weird kids make the rules.

How do you keep your writing style flexible and compatible?
I feel like that’s my strong suit; I can be a chameleon. I can go into the studio with an artist and pick up on their vibe right away, especially if it’s an artist whose music I’m already familiar with. Dev, for example—I was a big fan of hers before I worked with her, so I came into it with an idea of where I wanted it to go. I just like to go in and help artists’ visions come to life.

I’m more than just a songwriter—I have a vision for everything.

Have you ever been surprised by how an artist acted and worked after you met them?
I’ve actually consistently been pleasantly surprised. There have been so many artists who I think are going to be assholes, but then you realize they’re just other humans. Songwriting tore down these constructions of celebrity and fame for me. When you’re songwriting with someone, you have to be so vulnerable with each other.

When Dev and I were getting the bulk of her album done, we had a studio rented out for two weeks, and we’d go in every day. We’d go in at two, buy a bottle of Jameson, and we’d by fucked up by five or six. When you work with an artist for a month, it’s the equivalent of knowing someone for like, two years. You build a bond. That was so cool to be involved with the whole project, crafting her sound, figuring out what the next logical step for her as an artist would be. I’m more than just a songwriter—I have a vision for everything.

Do you ever have a very specific vision for a song that doesn’t get realized when the performer uses your material?
At first, that was a huge frustration. Usually when I’m writing for someone, the demo tape will at first be me because I write on the mic, and at first I was trying to get artists to mimic what I was doing, but then I realized that once you get the idea out and the artist tries it, they’re usually doing their rendition of it, which is more true to them. I warmed up to that. The artist being true to themselves is definitely a good thing. Now I love it—when the artist changes a melody or interprets something differently than I had envisioned, it’s cool.

When do you know you’re finished writing a song?
When I write three minutes of lyrics, I guess.

It’s a time thing?
It’s not a time thing. I used to feel like I was constrained by the traditional construction of a song—first verse, chorus, pre-whatever—and have all those parts, but now I usually have a producer or a beat and I’ll freestyle melodies over it. I’ll start with the hook and build verses around it. I could keep writing shit forever, but I don’t like to overthink it. Once I feel like the idea I want to get across is there, and it sounds good, then I know it’s done.

Let’s talk about your transition from being a behind-the-scenes songwriter into recording a song as lil aaron the artist. That started with “Damn,” right?
When we made “Damn,” I was still in write-for-other-people mode, so that song started as a pitch idea. There are things you do when you’re making a song to pitch, and a lot of times you won’t say what you want to say and instead you’ll say things that will make more sense for the artist you’re writing for. When I got deeper into it, I was like, “Fuck that, I’m just going to write what I want.” Then once we finished the song, I realized how dope it was, and the more I sat on it, I realized I had all this freedom if I would be the artist recording it. I had always planned on being an artist, but I always wanted it to be at the right time. But when we put that song together, it made sense.

I don’t know that I’m necessarily ready to be an artist, though. This idea of being a person that everybody looks at is really scary for me. Not that I plan on being famous, but on even any level of internet fame, I’m scared of the idea that someone has something to say about everything I do. I even tweeted some stupid shit the other day and random girls were just tearing me apart about it, and my homie Travis was like, “Yo, get used to it.” And I don’t give a fuck about what other people think, but I’m so bad at ignoring what they say.

Are you also afraid of that lack of freedom to express your artistic diversity?
My plan with that is to create the expectation that I’m all over the place. I’m still going to be consistent to this trap/rap meets punk/emo stuff, but I have this record called “Drugs” that’s like a Blink-182 song on drugs. I don’t know if I want to release it on my own, though, since “Damn” is the precedent and I’m trying to figure it out. I want to be somewhat consistent, but, like, I made a country song with Brenton [Duvall] the other day, and that’s part of the reason why it took me so long to start my artist project—because I love and want to make so many different types of music. But as an artist, I’d love to be all over the place and have people being a fan of me being all over the place.

I love the idea of an artist making whatever he wants, and not being tied up in meeting expectations. But at the same time, it would make sense and would all tie into each other because at the end of the day, the music is coming from that same person.
Yeah, and what also is weird is that as a songwriter, I can say whatever I want, and if the artist wants to say it, that’s on them. These are the words that they have to live by. Now as an artist, people have no one to come at but me for saying them. I write some fucked up shit sometimes. It’s this weird battle—do I want to be totally honest with everyone and maybe have to deal with the consequences? Being an artist is weird.

We’re in this age where everyone understands—or at least think they understand—how the music industry works. Ten years ago, you could sell ideas, pitch artists to companies, and everything was so structured. But now that everyone understands what happens behind the scenes, people want to hear shit that’s not fully manufactured. Music where you can tell the artist had fun making it is so powerful. I think “Work” [by Rihanna and Drake] and “Pass Dat” by Jeremih are perfect examples of that. Plus, “Pass Dat” has a weird ass structure and is not necessarily the type of song that people would guess would be a No. 1 record, but it works.

I think that’s a big part of what the mainstream music industry is missing, and what more emerging voices like yours can really bring to the table.
A lot of people can connect to that. And that’s what’s cool—with the Internet and where we are with media and technology, you don’t have to be selected by people in power to be successful in the music industry. Anywhere I am right now, I did all by myself. I have an ill manager who’s helped me out a bunch, but I really forced my way to where I am. Ro [Ransom] is a great example of that, too; nobody really chose him, but he chose himself.

And as Ro and these other untraditional artists start manifesting and really blossoming, weird people are going to become celebrities. And when that happens, they’re going to use their weird tastes to influence other people. Pop music is going to become weird. And that’s so dope.