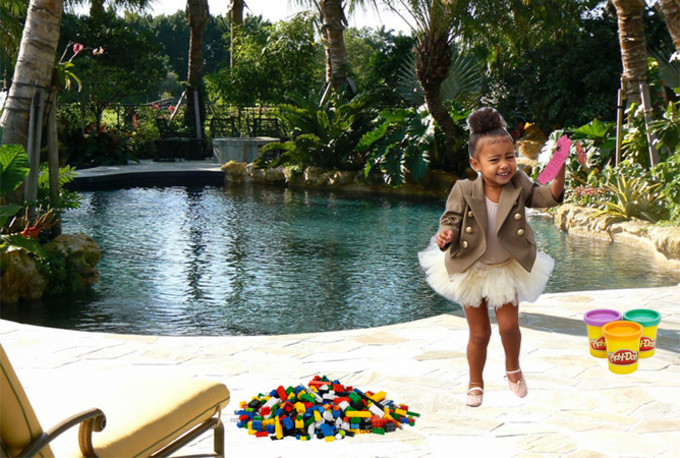 I’m following a butler through a massive mansion. We walk across marble floors and out onto a patio surrounding a lagoon-like pool.

“The lagoon was imported from the Cook islands,” the butler whispers.

I see a table covered in papers, dolls, and Play-Doh. North West, rocking a tan Balmain blazer and tutu, is standing a few feet from the table, pacing back and forth while talking into a cell phone.

“I just don’t see how I can be expected to owe anything when he’s the one B&E-ing. Breaking and entering, Arthur. Look it up. This is preposterous. Alright, well you let Mr. Claus know I’m expecting a call first thing Monday.”

North closes a flip phone and exhales deeply. She walks over and tosses her cellphone on the table. It’s a pink, toy Barbie phone. She notices me and flashes a smile.

“I’m so sorry about that… tax season, am I right?”

North moves to the table and sits down.

It’s been 15 months since I last saw North, so she’s actually doubled her lifetime since we last spoke, and it shows. She’s evolving.

I take a seat across from North at the table.

“Taxes on Christmas presents?” I ask.

“Yeah! Gifts are income, you know. But I can’t get over this crook, Claus. Did you know he has more than 8,000 employees working for him 24/7, and he only pays them in candy? His turnover rate is two weeks! The city is ravaged with diabetes, yet Claus just sits back for 364 days each year, judging children on their every decision. It’s hard to be perfect! One bad moment shouldn’t condemn a kid to the ‘naughty’ list. The whole system is a mess. It’s not fair.”

North crosses her arms and pouts, and I can’t help but laugh.

“North, Santa is watching you, yes, but he doesn’t see your every move. Everyone slips up, but as long as your heart’s in the right place you’ll be good.”

“No, he sees everything. His people follow us everywhere! They literally park outside of our neighborhood and wait for us to leave our house. Then they follow and take pictures of our every move. And if I mess up, Santa gets upset! Last year I spilled a Go-Gurt and I lied and said it was Kylie. So Santa took Grandpa away. It’s okay, we got a new Grandma instead. I just smile and nod, but really I have no idea what is going on.”

This isn’t the interview I came here for. We’re getting off track. I reach down to grab a notebook from my bag. As I lean down my forehead cracks into the table. It hurts. Bad. North bursts into laughter.

“That was so funny. I’m dying. You wanted to grab your bag but forgot the table existed. Brilliant!”

North is now in a great mood. The interview continues.

Have you heard your father’s new album?
No. Well, some parts. He plays it a lot. But honestly I don’t care too much for his music. I’m sure one day maybe I’ll understand it, but I don’t know. He yells a lot. I really love Taylor Swift. She’s just so great. Fearless is my favorite album and “You Belong With Me” is my favorite song. I absolutely adore the music video.

“It’s a Lisa Frank custom,” she says, glowing with pride.

Do you know much about your dad and Wiz Khalifa’s Twitter fight?
I don’t really use Twitter. I only get 90 minutes of screen-time each day, and usually I use it for Wikipedia or Animal Crossing. Sometimes I save up all my minutes from a week and use them for a Looney Tunes marathon on a Saturday. I negotiated the rollover minute plan myself.

But from what I’ve seen of Twitter, I don’t think I like it very much. Every day billions of people have billions of thoughts. Simple and fleeting thoughts. Thoughts that don’t matter and don’t need to leave the brain. By definition, a “thought” is the product of mental activity. It should stay in one’s mind and be examined over and over, and assessed and tweaked and molded into a constructive statement. Thoughts should be analyzed and presented when they’re mature and ready. Twitter removed that process. Now, the second an idea blooms in a person’s mind, they shove it into the world. It’s like delivering a baby after seven weeks. It’s a fetus. Twitter is literally a billion fetus ideas squirming around, screaming for care and attention.

Is there any certain artist you’ve seen collaborating with your father that’s exciting to you?
One of my aunts gave me these CDs for Christmas. I think she forgot to get me a present so she just grabbed old stuff from her closet, but I still love these CDs dearly.

After bugging my dad I finally got him to agree to have a few studio sessions with Lou. I can’t wait to hear the tapes.

Kanye and Lou Bega have been hitting the studio together?

I can’t believe New Radicals only made one album. I would love to hear more.

Rihanna’s new album went platinum in a day because Samsung bought a million copies and gave them away for free. Is that fair?
No. That’s really dumb. My family alone could make Kanye’s album go 10x platinum in 10 minutes if we wanted. Then what’s next? Brands buying five million copies, then 10 million? What if I record 10 songs and my dad buys one million copies, am I a platinum selling recording artist? Heck, I could seriously go platinum on my own. My mom made $100 million off an app where you pretend to be her. I can only imagine the numbers my debut album would pull.

Do you play Kim Kardashian: Hollywood?
No… I like Legos better.

Legos are the greatest toy of all time. Do you have an iPhone?
Not yet, and I’m not sure I want one. I see how upset and crazy they make my family sometimes. I’ll walk into the living room and they’re all sitting there staring at their phones for hours with angry looks on their faces. Eventually though, they’ll take turns smiling, posing and taking pictures of each other. Someone will post a picture and if it gets a lot of likes, they get happy. If the picture doesn’t get a lot of likes, they get sad. My aunt knows how many likes all of her Instagram pictures have. Isn’t that wild? Can you imagine trying to explain that to someone from 1870?

It would take weeks to even explain the concept of the internet, let alone Instagram. What do you like to do for fun?
Anything! Paint pictures, sing songs, buy credit default swaps. I’d rather climb a tree and fall, and bust my knee open, and bleed—make a lasting memory that I can keep with me for life. Not sit on my phone all day.

So you still want to sell seashells in Hawaii?
Maybe at some point. I’m more focused on reform in the North Pole. I’m working on a plan to trap Claus next Christmas. This year’s plan failed miserably.

What happened?
I got sleepy. But when I woke up the cookies I left him were gone so I know he was there.

Well I’m sure you’ll get him next year, North.
Sometimes you gotta dig the dough out the holes.

What?
Play-Doh. When you mash Legos into Play-Doh it gets stuck in all the crevices of the Lego brick. The dough hardens and it can ruin a Lego. So it’s easy to throw the Lego away and buy a new one, but sometimes you gotta take a minute and dig the dough out of the holes. Good things require hard work.

[North is pushing Lego bricks into a big ball of Play-Doh.]

Suddenly I feel someone shake my shoulder.

I jolt awake to find myself sitting at a bar. The bartender who shook me awake is staring at me with a look of concern.

“Well, you came here in about five hours ago, drank 12 whiskey-gingers, stumbled around the bar asking everyone about Legos, Play-Doh, and North West, and then passed out on my bar.”

I look around at the empty bar, and rise from the barstool.

“Sorry about that… I’ll just be going.”

“No worries,” the bartender says as he escorts me to the door.