In a very Death Grips move, the band has, without warning, announced that they are releasing a new album. Taking to their Facebook this evening, Death Grips stated the new album will be called Bottomless Pit. The announcement was accompanied by a video of late ’70s film star Karen Black reading dialogue that Zach Hill wrote for her.

Iconic 70’s film star Karen Black passed away in August 2013. In February of that year, Karyn Rachtman introduced Ms. Black to Zach Hill. The two immediately hit it off. Zach had written a part for Karen for a film he was developing and gave her the pages for her scenes. Though she didn’t know how the scenes would fit into the final film, she readily agreed to read her character’s dialog on camera for Zach.

No other details have been shared in regards to the album, so we’ll all just have to sit and wait. For now, watch the video above.

Related: It Sucks to be a Death Grips Fan 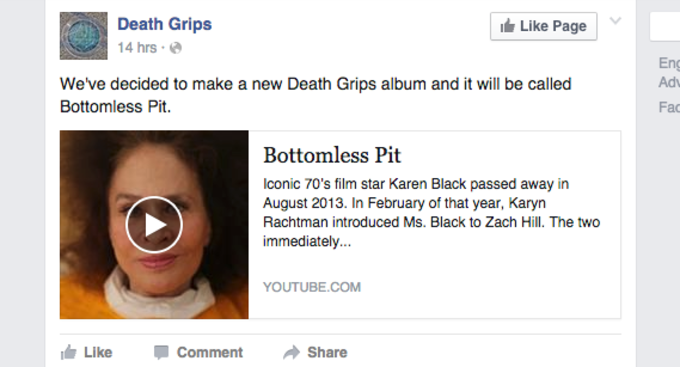