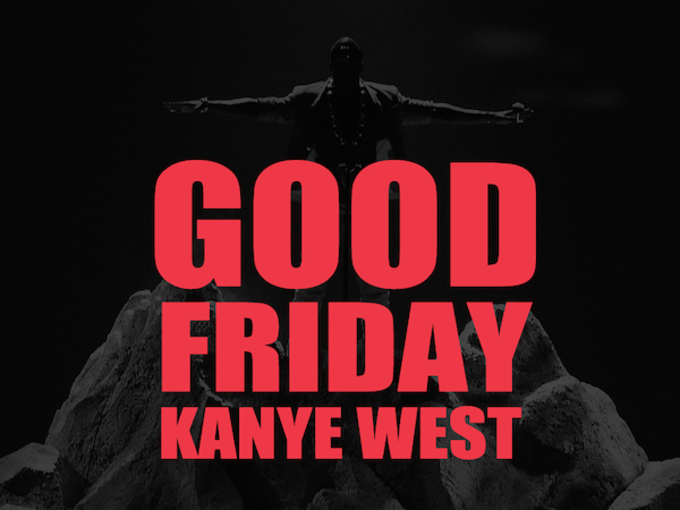 Fall 2010 was the most exciting time to be a Kanye West fan, but not because of November’s My Beautiful Dark Twisted Fantasy. No, in 2010, Kanye gifted us with something even better—GOOD Fridays. In the months before MBDTF‘s release, Mr. West was dropping some of the best music of his career. And it was all free.

During that season-long stretch—which began around this time five years ago—Kanye released a new song once a week, for a total of 15 tracks. I remember the excitement that came with each Friday during that magical time. I should have been worried about college applications, but I couldn’t help obsessing over what time Kanye would put the next song up. With each delay, I’d imagine the last-minute work going into the finished product.

It was in those moments that my loyalty was cemented. GOOD Fridays were the reason why I became and remain the sometimes obnoxiously dedicated Kanye West fan I am today. How could you not be grateful when one of the greatest living artists gives you an album-quality song every week?

As the weeks went by, GOOD Fridays slowly became Kanye’s most unique body of work—and also his most underrated. Part of the magic came from timing: Kanye had reached the upper echelon of music royalty, and had just come off a tumultuous year as a celebrity.

He had experimented with unique campaigns before (deading 50 cent in the process), but GOOD Fridays provided Kanye with an opportunity to step back from success and reflect. That fall was the moment he returned to the music, and reminded us how much more than tabloid fodder he was.

The resulting music was amazing. Here’s the proof:

The series began with “Power (Remix),” which was released on August 20, 2010. The second week brought us “Monster,” the track that catapulted Nicki Minaj’s career to the next level. Each week we got more previously unreleased material like Child Rebel Soldier’s “Don’t Stop!,” “So Appalled,” and many songs that emerged from the “Rap Camp” sessions in Hawaii. A few even ended up on MBDTF.

The songs spanned the full spectrum of GOOD Music’s capabilities, both in terms of sound and content. Kanye got political with “Chain Heavy,” dissected personal demons with “The Joy,” delivered a laid-back party with “Good Friday,” and unapologetically admitted douchebaggery on “Take One for the Team.” We got to see Kanye’s thought process play out in real time, and it provided the unique chance to see more sides of the artist than ever before.

My own two favorite GOOD Friday tracks couldn’t be more different. One is “Christian Dior Denim Flow.” It’s the genesis and pinnacle of Kanye fashion rap. It begins with a clever verse from ‘Ye that incorporates the names of more than a dozen models. The production on the song is incredible. Kanye layers John Legend and Kid Cudi’s voices in a way that adds a little bit of weight to what could have easily been a trivial song.

My absolute favorite, though, is “Christmas in Harlem.” It’s the only song to be released post-MBDTF, a Christmas song that fits in any season. Featuring a lovely hook by Teyana Taylor, the song also fittingly (given Kanye’s then-blossoming penchant for collaboration) features a Dipset reunion. “Christmas” represents the antithesis of “Christian Dior’s” glamorous lifestyle, trading supermodel name drops for mistletoe and proving GOOD Music could do more than boast.

It’s as if the one-off nature of the tracks gave Kanye the freedom to cut loose without worrying about an ambitious overarching theme. The songs didn’t need to “fit” into anything—they simply were what they were. And unlike his previous projects, Kanye sometimes handed production duties off to Swizz Beatz, Hit-Boy, and Q-Tip.

GOOD Fridays gave us the the first real look at Kanye’s collaborative spirit, and an introduction to the way he would make music for the next five years. The curtain was pulled back on his creative process—even after you downloaded the song, you still had to check back to make sure ‘Ye hadn’t replaced the first version with another, featuring new verses, a better mix, or a rearranged cover. We always knew Kanye was a perfectionist, but during GOOD Fridays, we got to see it unfold in real time.

Though there were more than 35 contributors to GOOD Friday, it never descended into chaos. It’s the unselfish side of Kanye as an artist that many people decided to ignore after the VMAs. (For example, he included Nicki on “Monster,” even though she clearly bodies him). Nobody was the star of the show, which meant the spotlight could fall on anybody.

GOOD Fridays gave us the the first real look at Kanye’s collaborative spirit, and an introduction to the way he would make music for the next five years.

The younger me saw it as Kanye atoning for his sins with his fans post-VMAs, a reward for the months spent defending him to family and friends. It was special that an established superstar, in the pre-Soundcloud era, reached out to his fans directly, gifting them high quality music on a weekly basis. It created community around the music and around the artist, before social media had the hold on the industry it has today—long before Apple Music started giving artists radio shows, even before fans could convince their idols to create cat remix albums.

In that pre-album phase, it seemed like the fans were the main focus, not critics, awards, or great musical feats. And that’s why it’s fine, better even, that the GOOD Friday tracks are nothing like the subsequent albums. They have a more populist, fan-pleasing quality to them. While MBDTF was his statement to the world, GOOD Fridays was a presentation for his fans, something we may never get again from Kanye West.

These days, Kanye is more distant than ever. His rocky relationship with the media has probably caused him to put up some walls, and, of course, he has a family now. He doesn’t do social media, GOOD Music has turned into something of a mystery, and there’s not much reason to check in on his website for updates.

As we’re waiting on an album to drop, we’re almost completely in the dark. Kanye West is a constantly evolving artist, and things are different these days. All things must come to an end, but we’ll always have that one fall, when Kanye West made sure every week was GOOD.