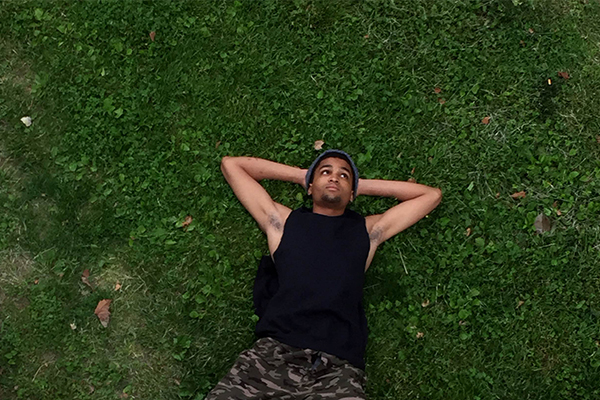 Dylan Brady dropped one of the most inventive debuts in a long while with All I Ever Wanted, and it was full of collaborations from friends new and old. While a few of the names on the record will be familiar to some, it was the unknowns that really piqued interest. Saputo, Ketema, and Ravenna Golden all seemingly came out of nowhere to further bolster an already impressive release.

When Brady introduces the world to another artist, it’d be wise to take note. It’s worth paying attention to his neighbor, Calvin Lewis, in particular. Lewis wasn’t on All I Ever Wanted, but he’s still part of the same crew that makes up Brady’s St. Louis-based collective, Round Table Clique. Listening to his debut project, dovelace, it’s easy to see what caused Brady to form a creative partnership with him: his production is confident, his vocals malleable, and he possesses the same knack for unpredictability that made All I Ever Wanted so captivating.

There’s absolutely no pinning down dovelace. Full of unexpected vocal turns and inventive instrumentals, it’s the type of album that comes across as more of a highly-polished sketchbook than a fully-formed release. That’s no slight, as dovelace remains an absolute delight throughout its brief running time, even if it does flick through its pages a little too fast to really understand what it’s all about.

But really, it’s not an album that begs to be understood, even if it does warrant incessant repeat listens. Lewis has built himself an interesting framework that shows a lot of promise, and a lot of possible directions. Listen to dovelace below, and get to know the St. Louis-based genre-hopper below that.

How’s it going? Tell me a little bit about yourself.
Hey. I’m a 22-year-old musician, B student, line cook, and an avid over-thinker.

How long have you been making music for?
I started playing music in the third grade as a trumpeter for the school band. I didn’t start recording or making beats until the eighth grade though.

What inspired the creation of dovelace?
Isolation. During 2014 I spent a lot of time in self-imposed isolation. I made the majority of this album living in my parents’ basement with minimal contact with the outside world. Creating this album helped me process all the emotions and thoughts that come along with such an experience.

You seem to be a bit of a genre hopper, and I would say it’s pretty hard to pigeonhole your music since it jumps around so much. Was this a one-off thing with dovelace or will you be continuing to experiment with different sounds in the future?
My approach is not very calculated. I try to have the music I create be authentic to whatever I am experiencing in the moment, but I am also very critical of my own work so there’s a lot that doesn’t get released. Been working on a lot of collabs lately with Dylan Brady, Timmy Stallone, Ketema, and some other St. Louis artists, which we aim to release this summer. We have a lot in the works that sounds nothing like dovelace, keeping the incohesive tradition alive!

How did you link up with the artists you’ve been working with in St. Louis?
St. Louis is the city of mutual connections. I started working with Timmy Stallone during high school and from there ended up meeting other people who were into the craft through word of mouth alone.

Dylan recently told me that you guys are working an EP together. Will we be seeing this anytime soon?
Yes and yes.

Do you have any interest in producing for other artists?
Always. Collaborative creation is my favorite activity.

Will you be expanding into visual content in the future?
Yes. ^ – ^

What are your aspirations for the future regarding your music?
My only true aspiration at this point is to improve everyday, and to have my music be an authentic representation of my taste. To me, music creation is a meditative practice and maintaining clarity in my craft helps me to maintain clarity in other aspects of my life.