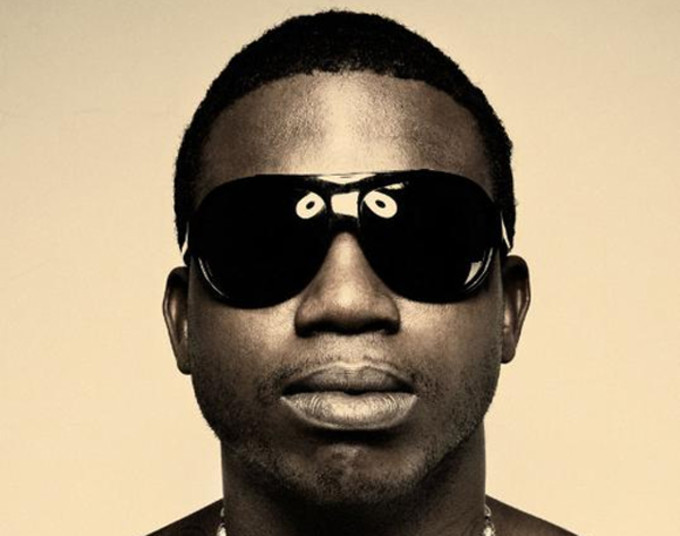 All told, Gucci Mane has been one of music’s most startlingly prolific voices since his debut in 2005—he’s a rapper achieving success largely on his own terms, flooding fans with a steady stream of the content that satisfies and, at best, showcases a peculiar wit and singular style. With the arrival of Trap God and a rejuvenated Gucci, now seems a perfect time to dig into some career highlights and provide a primer on one of rap’s more divisive figures, hailed as a wordsmith by some, a curio by others, and dismissed as a mush-mouthed fool by others still. The intersection of these elements makes him a consistently compelling artist, as likely to inspire fervent defense as outright rejection.

Take a trip into the wild, wonderful world of Gucci Mane and check out his 15 essential songs. 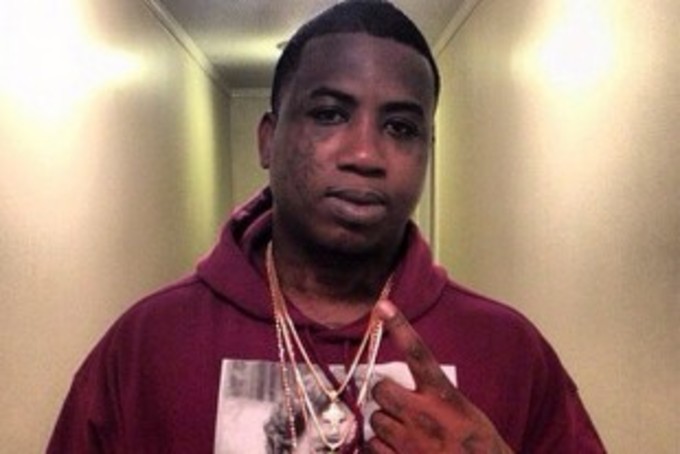 The State Vs. Radric Davis

Gucci likes to party. A lot. When Gucci parties, he can’t just have a drink or a little hit, maybe half of pill of ecstasy instead of the whole thing. He’s got to get wasted. That’s the concept of “Wasted”; it’s pretty simple: “Rock star lifestyle, might don’t make it/Living life high, everyday clique wasted/Sipping on purple stuff, rolling up stanking/Wake in the morning, 10 o’clock drinking.” It isn’t Gucci’s most ambitious statement, but it is one of his most well known, and features enough trademark Gucci weirdness (“And Gucci’s not a racist, all my diamonds caucasian”) to lift “Wasted” above mere fodder for the singles charts. 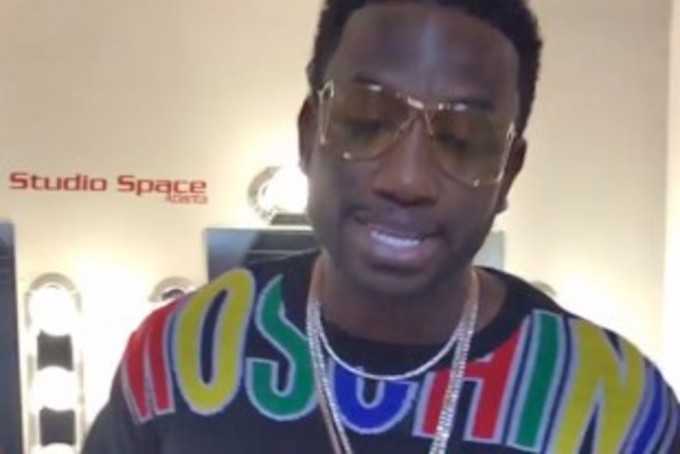 Gucci’s delivery–a mixture of drawl, accented drone, and occasional bursts of energy–often seems best suited as a a vehicle for delivering cold confidence and utter disdain, two traits that lie close together. From the floor up, “Dope Boys” is pure contempt, with Shawty Redd’s Halloween-symphony beat providing the gloomy bedrock for a slew of entertaining boasts: “So much stacks up in my closet I can’t even see my clothes/And my belly gettin’ so big, I can hardly see my toes/I got a car in my garage I have never ever drove” and “Mirror mirror mirror, who’s the realest in the game?/Why you ask that stupid question, boy? You know that’s Gucci Mane.” While some artists flaunt, Gucci consumes and disregards. 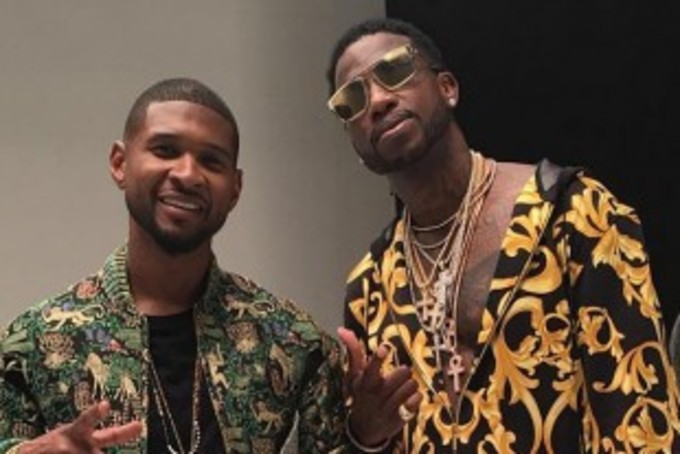 Gucci at his unhinged best. Though some P&Pers claim they can understand what Gucci’s saying, even the most devoted Gucci acolytes would be hard pressed to catch every word in the rapper’s jumbled ode to his own stardom (particularly in the first verse). “I’m A Star” is Gucci tapping into maxed out rock star levels of not giving a fuck, throwing his voice all over the track like a drunken instrument, before the chorus comes in loud and clear to announce Gucci’s car, clothing, and sunglass prowess. 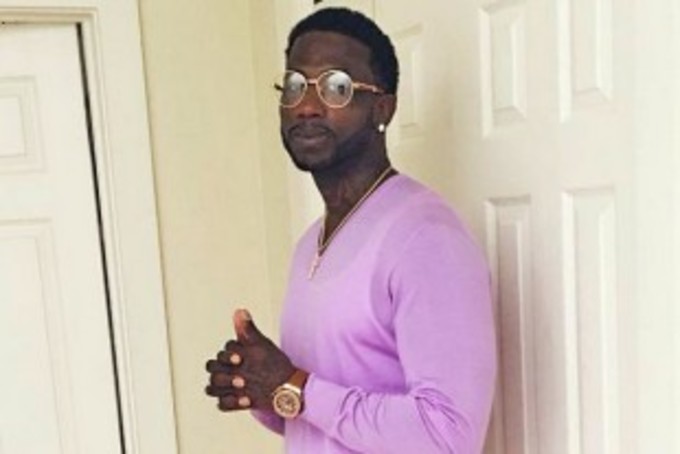 As the YouTube comment section will attest, “Freaky Gurl” marks the beginning of Gucci’s initial ascent, the period from 2007 to 2009, buoyed by prolific output and plagued by incarceration. “Freaky Gurl” features a Gucci Mane closer to the 2012 edition, his drawl more pronounced than on 2005’s breakout single “Icy,” his trademark “yeeeeeeaaaah” ad-lib blanketing the track like a hypeman, and his penchant for changing the sounds of words to fit rhyme schemes on display. Reinterpreting Rick James’ iconic “Superfreak” doesn’t hurt Gucci’s cause either. 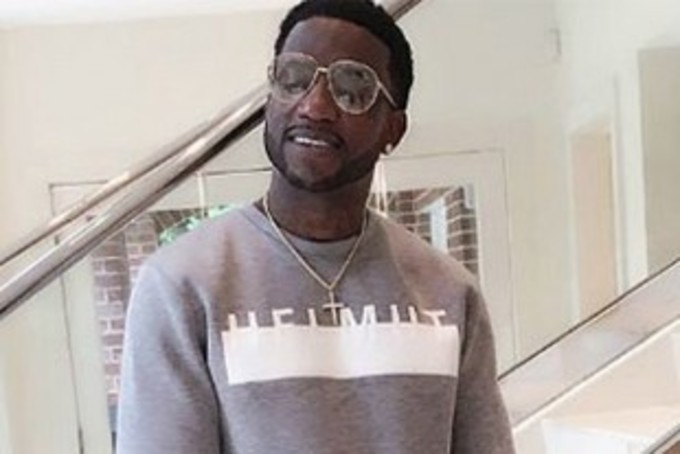 The State Vs. Radric Davis

Emotional and personal candor aren’t typically associated with Gucci Mane’s music, making The State Vs. Radric Davis‘s “Worst Enemy” all the more effective. In the course of four minutes, Gucci reflects on his social impact, the effects of his actions and lifestyle. Though he isn’t precisely remorseful, he displays an acute awareness of the imprint he leaves on the world around him (“That day they tried to murder me a day I can’t forget about/And I don’t wish no death on homie/Just want him to hear me out/Think about the past and all the many things we talked about/Think about all the people influenced by what comes out our mouth”) as well as his own feelings, even if his hardened exterior won’t allow listeners much farther in than, “First Tupac died, then Biggie died/And it greatly impacted me.” As interesting a psychological portrait for what it includes as what it leaves out. 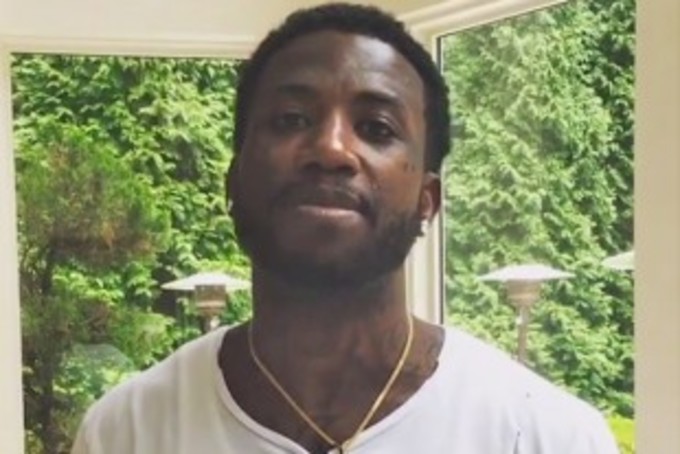 Armed with a killer chorus (and a line that would turn into another) and pared down, burbling synth beat, Gucci’s “Pillz” is a song about ecstasy that sounds decidedly unlike the typical musical accompaniment for one of rap’s current favorite drugs–perhaps because it predates mainstream hip-hop’s MDMA fixation by over half a decade. Gucci’s ode to rollin’ succeeds on reckless abandon, simplicity, and his bouncy monotone–which pays off early in “Pillz,” when Gucci’s flow breaks down while asking for a glass of orange juice. 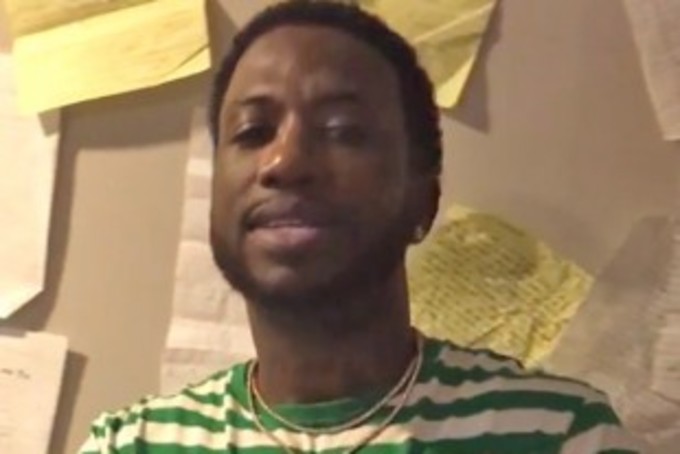 The title should tell you all you need to know. If it doesn’t, the opening line “my swag turned up, my swag got a lamp” should clinch it. Though the content of “Weird” doesn’t stray far from Gucci’s typical predilections–stealing your girl, having a lot of sparkly jewelry, getting fucked up, selling dope–his unusually throaty delivery and pockets of stacked syllables and densely packed rhymes make for a particularly entertaining ride, and that’s without discussing the intricate beat built around squiggly synths and a drippy, loose organ. Also, the intro, chorus, and outro are basically Christmas carols reset to incorporate the drugs, hos, and old school Chevrolets Santa Claus always wanted but never knew how to ask for. 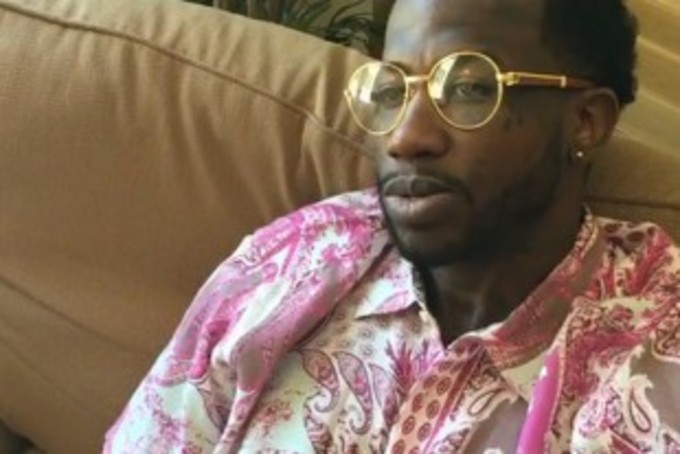 “Swing My Door” can most readily be described as sonic disregard for the human spirit. With its obscenely in-the-red bass–so poorly mixed that, no matter your set-up, it will sound distorted–“Swing My Door” might seem like an odd choice. Its importance is partly symbolic—it’s a shrug in the face of sonic quality and “professional” standards representative of the DIY attitude Gucci has cultivated since he began releasing music. Simultaneously, “Swing My Door” has become beloved by some and loathed by others as a subwoofer destroyer, a bassy killer as cold as Gucci claims to be on record. Speaking of the man himself, if your speakers haven’t been blown out completely, you may notice that he’s rapping well about selling drugs on “Swing My Door,” as usual. 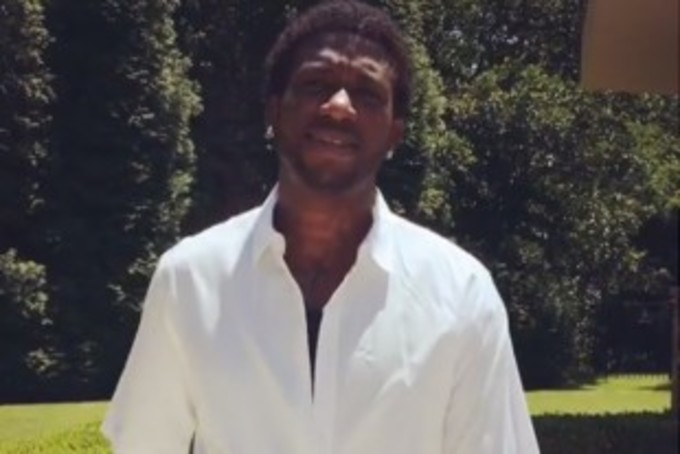 Gucci Mane’s first commercial single “Icy”–which features equally wet behind the ears soon-to-be enemy Young Jeezy–sounds worlds apart from the rapper’s recent catalog, his signature drawl spiked with unusual annunciation and energy. Aside from providing the first entry in Gucci’s long running partnership with producer Zaytoven (whose beat here sounds reminiscent of some of Mannie Fresh’s more propulsive productions), “Icy” suggests some of Gucci’s Atlantan influence, rocking a cadence and vigor that sound entrenched in the flows of the city’s scene in the early 2000s. 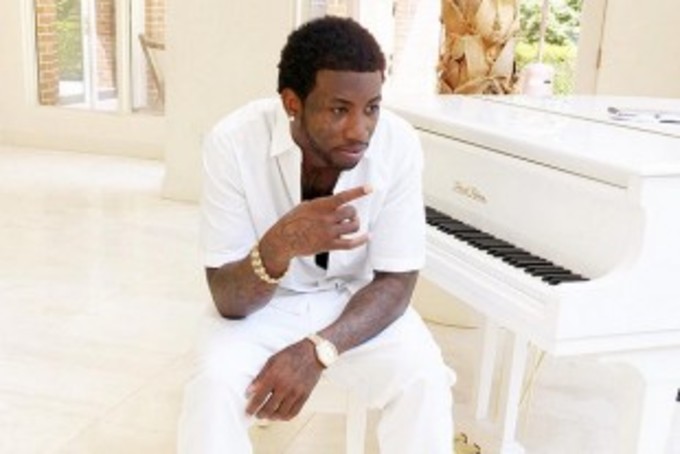 On “I Think I Love Her,” Gucci combines two of rap’s longstanding tropes–the battle of the sexes track and the personification of something (typically hip-hop) as a woman–to craft a verbal love-hate relationship with Susie, cocaine anthropomorphized. The back and forth is enlivened by Gucci’s flow, punctuating his typical drawl with stacked syllables and lines that land sharply on beat, creating a sense of momentum that might be unexpected for the uninitiated. Gucci’s unhinged delivery on the chorus completes the package, playing off Ester Dean’s heavily effected vocal and sounding as much like fiend as obsessed pusher. 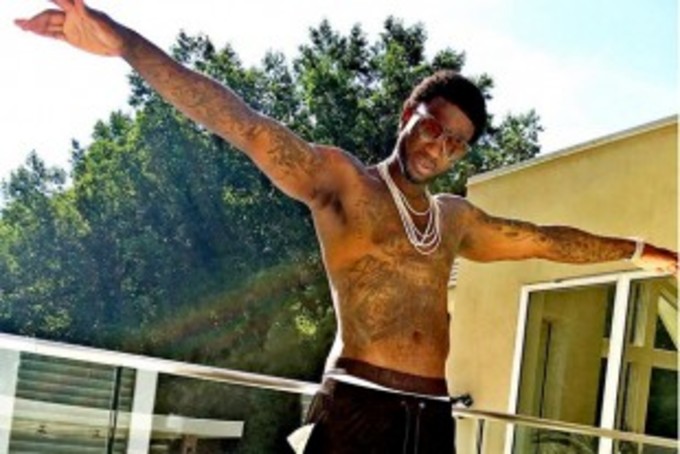 “Photo Shoot” is about as close to a meditation on life in the spotlight as listeners are likely to get from Gucci Mane. While it has become more fashionable to bristle at the notion of the life caught on camera, Gucci invites the cameras with “Photo Shoot’s” catchy chorus–a playful dose of weirdness that showcases his particular gift for strange sounds and brain-burrowing, memorable hooks. 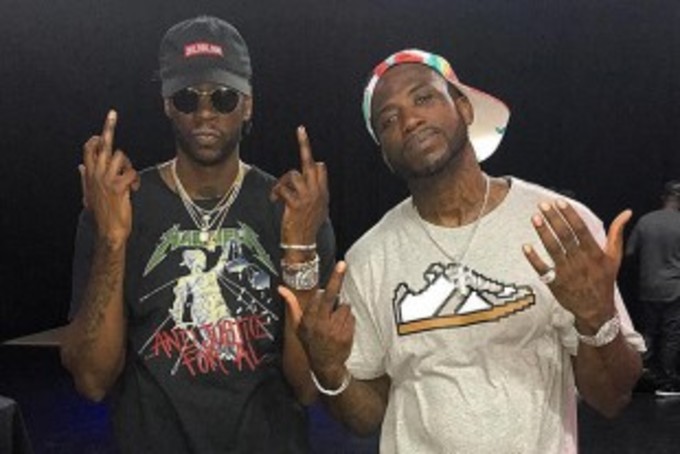 Titanic, dark, and searingly arrogant,  “My Shadow” incorporates Gucci’s wit, wordplay, and street-weariness into a singular statement of “don’t fuck with me” purpose. Gucci sounds as invincible as he claims to be on the wall-of-sound chorus, a one man army of distrust, puffing his chest and slyly hinting at the danger of a treacherous life–whether in entertainment or drug dealing, trust is hard to come by, harder still to maintain. “My Shadow” is the sound of life lived on the edge turned into iron will and steely attitude. 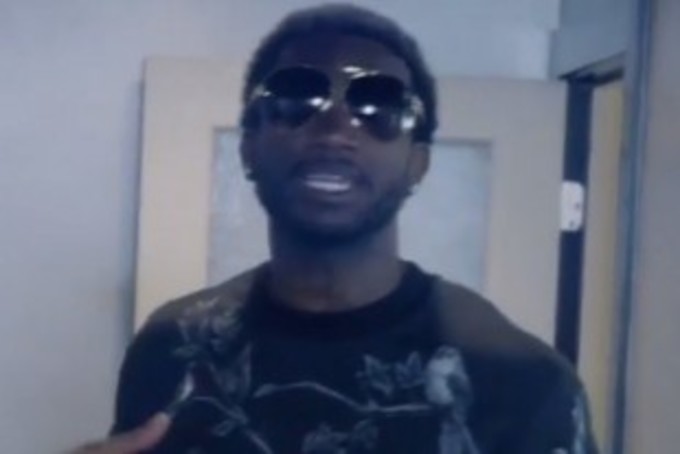 Though Gucci isn’t often counted among rap’s great storytellers, his imagination does expand beyond elaborate boasts, drug talk, and iconic ad-libs. “Timothy” sees Gucci filtering the great tradition of cautionary drug dealer tales in rap (the chorus itself is a sort of Hip-Hop frankenstein, sewing together the tried and true “here’s a little story…” opening bar with an Atlanta-fied interpolation of Eazy-E’s “Boyz in the Hood”) through his particular lens, the language and sound of the trap. It’s a potent formula made all the more striking, perhaps, because it eschews the moralizing of songs like Ice T’s cautionary tales for the bleak cause and effect realities of Gucci’s pervasive street existentialism. It’s dark, entertaining, and an impressive expansion on expectations. 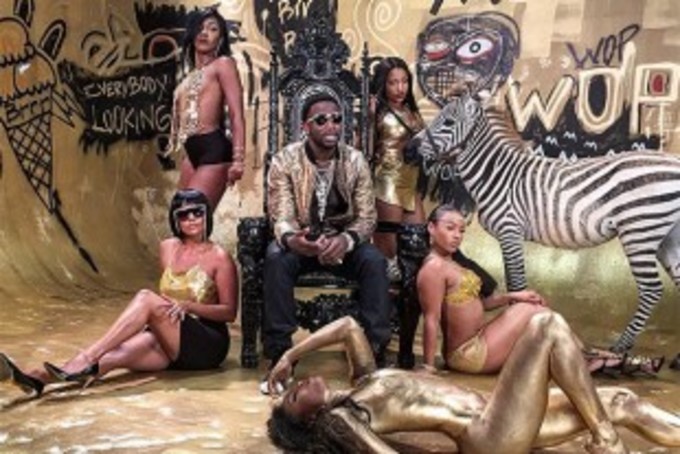 Taking the R n’ Bubblegum of Trey Songz’ “LOL :-)” (which happens to feature Gucci) and transforming it into a drug-dealing anthem full of gangster bile, Gucci’s “Frowney Face” showcases an imagination akin to peak-era Lil Wayne, with both rappers displaying an adeptness for putting off-kilter twists on familiar beats and phrases. “Frowney Face” is modern gangster rap that perverts a pop hit into something of a darker design, a clever subversion that often lies hidden to the uninitiated–or anyone who finds Gucci difficult to understand (of course, Rap Genius is your friend if comprehension is your issue). 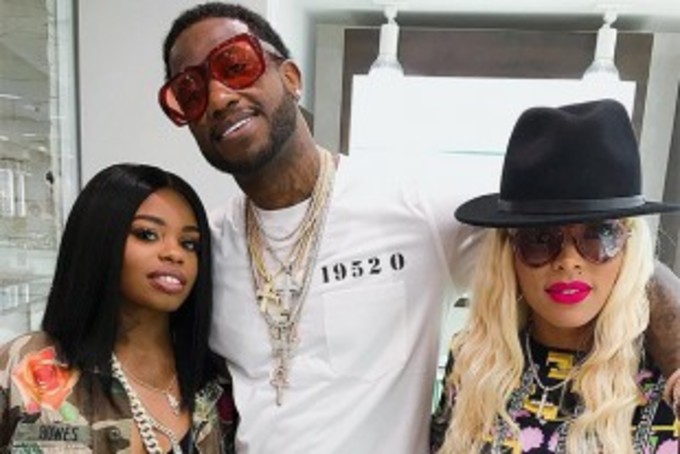 The State vs. Radric Davis

Though Gucci’s commercial singles have occasionally strayed from the core formula that made him successful, “Lemonade” suffers from no such dilution. With Bangladesh’s infectious piano and room-consuming low-end in tow, Gucci uses “Lemonade” and the color yellow as launching points for four minutes of deceptive wit, breathing humorous life into well-worn boasts and disses. While this sort of single-mindedness is typically consigned to rap’s independent scene, Gucci manages to cleverly explore a loose concept, never overexerting himself or diving too deep–he doesn’t, for example, rap from the perspective of a lemon–while finding unexpected opportunities for wordplay and punchlines in his topic of choice and piling them on without pause.