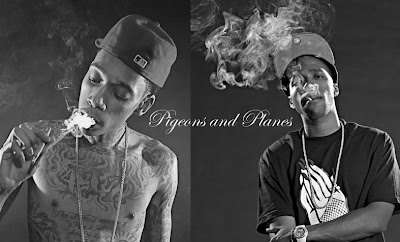 While I was at Lollapalooza Curren$y and Wiz Khalifa dropped a mixtape called How Fly. Ramz posted it and you can grab the whole thing here, but I wanted to take a minute and highlight a few tracks.

If you follow current hip hop at all, you’ve probably been hearing these two names a lot lately. Unfortunately, I’ve heard more buzz than music, and I’m excited to get into this tape and really make up my mind. These guys both have the images and the hype to make a splash, but they still have to set themselves apart from the pack musically. Khalifa has already captured my attention with his Flight School mixtape, but Curren$y has been dropping shit for a while now and besides a few tracks that made it on to my playlists, nothing has stuck with me. So basically this mixtape is a make or break. Two fresh artists that I want to give a shot on one mixtape. Let’s see now.

Best song on the tape. Wiz kills it.

Curren$y & Wiz Khalifa – Over The Building

Alright. After giving the tape a listen here is what I’m thinking: Wiz Khalifa is a dude to watch. He’s young, he has crazy charisma and his flow makes Curren$y sound like Birdman on a Weezy track. Curren$y has been bouncing around the hip-hop world for a minute now, and I think there’s a reason that he hasn’t really established himself. I’ll let you decide that reason for yourself. The three tracks above are my favorites on the tape. Check them out.