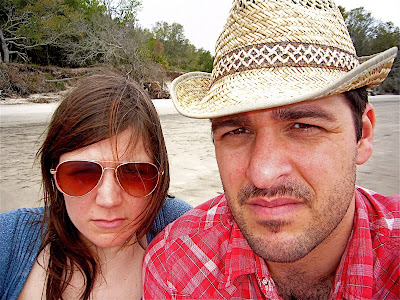 The Welcome Wagon got my attention because they have been working with Sufjan Stevens on their debut album Welcome to the Welcome Wagon, which will be out Dec. 9th on the Asthmatic Kitty Label. Their music is often described as gospel/folk, but you don’t need to be a religious hippie to appreciate it. Vito Aiuto, the male half of The Welcome Wagon, was kind enough to answer a few questions for Pigeons and Planes:

P&P: I know you started out making music with your wife in your home. This struck a chord with me because I really enjoy making music with my girlfriend. How did it start with you two? Were you both very open to the idea, and who does what during the song-writing process? Did you record and keep any of those early musical endeavors?

Vito: Monique and I started playing music together soon after we were married in 1998. I wanted to have music in our home, I wanted us to sing hymns and folk songs and such together, along with any children we may have. So, I bought a guitar and started teaching myself to play. I’ve never gotten very good at the guitar, but we did start to sing together. And I started to write songs almost immediately. But that was out of necessity, really. By “write songs” I mean I wasn’t able to read music, so I’d simply play and sing what sounded good to me rather than what was written on the pages of the hymnbooks I found.

In terms of how we write, I’m the one who does almost everything, but sometimes Monique throws things in. And I end up writing with her in mind, or her singing bends and cultivates things, so I do think of it as something we do together.

We started recording almost immediately, and we do have some of that early stuff. One of the first songs I ever wrote, “Deep Were His Wounds, and Red” is on the record. The basic tracks were recorded in our home in 2001.

P&P: What is it like working with Sufjan Stevens? How much of a role does he play in the process?

Vito: Sufjan has played a collaborative role in our music from the start. Monique and I wrote the music for our songs, then we brought them to him to begin the recording process. At that point we would work together on arrangements and instrumentation and everything else.

What Sufjan has given us is pretty immeasurable. He is a very generous person. But it’s hard to identify the specific ways he has helped and influenced us. In terms of who does what, at the end of day what matters most to us is the quality of the music and that people enjoy it and that it brings glory and joy to God. At the risk of sounding affectedly pious, we basically think that God made this music. The Holy Spirit is the real author and actor, and he was willing to use all the people who are on the record.


P&P: After beginning in such an intimate setting (that being your home), what is it like to play for larger audiences? Do you change anything about your music to try to appeal to more people?

Vito: We haven’t played many large venues. We played for about 100+ people once at a seminary, and that was scary and fun. Mostly we have played for small crowds, and many of the people in the crowd are usually our friends, so to play in a larger venue for people we do not know, I don’t know We’ll see. Sometimes we play in small clubs, and then we play just the two of us, quietly, just a guitar and a glockenspiel and the two of us whisper-singing out of tune. But as we have moved to slightly bigger venues some of the people who play on the record have joined us.

P&P: Last one. I’ve heard your music described as gospel. It doesn’t sound like gospel to me. Is it classified that way solely because of the subject matter, or do you draw from the gospel genre musically? I don’t like to classify music generally, but if you had to, what would you call your music?

Vito: Yes, I am not sure what to call our music. You’re right, it’s not “gospel”, strictly speaking. I think our music, genre-wise, is pretty undefinable, but I don’t think of that as some kind of badge of honor. It’s just not working within one specific tradition. Some good music can be easily located in a genre (Jay-Z is hip-hop) and some can not (what kind of music did Neutral Milk Hotel make?)

P&P: Good luck with everything and I’ll be keeping my eye out for you! Tell your wife I say hello!

Vito: Thanks for your time and interest.