Skrillex shares his keys to success   0% 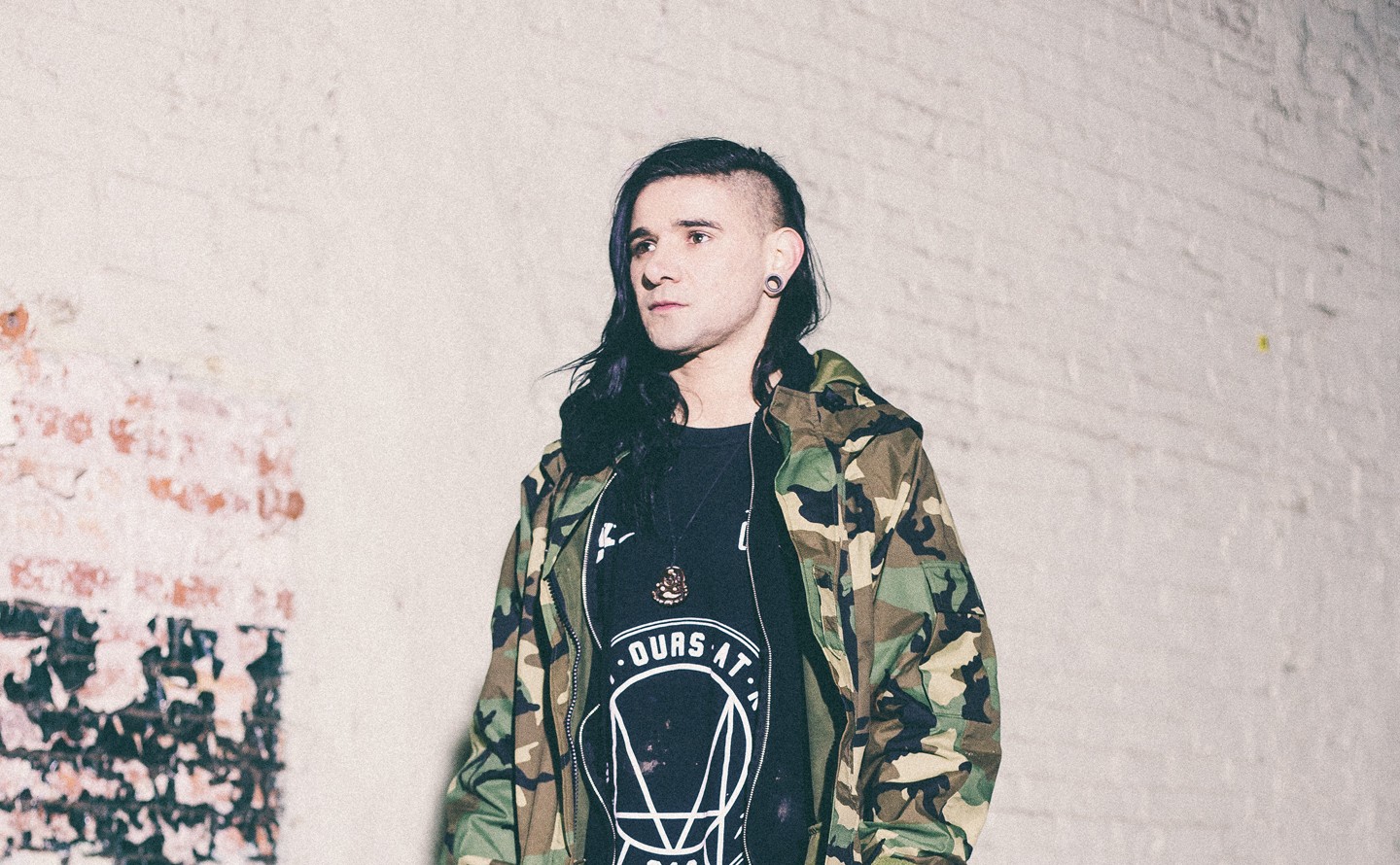 SKRILLEX
WORKING FOR IT

The megastar DJ and ComplexCon headliner shares the lessons he has learned from collaborating with Justin Bieber, clashing with deadmau5, and leading up his creative collective OWSLA.

Over the past eight years, Skrillex, born Sonny John Moore, has become the center of gravity for electronic music. As a DJ, musician, producer, label head, and entrepreneur, the 28-year-old Northeast Los Angeles native currently holds the record for most Grammys won by an electronic artist (eight), has racked up over three billion views on his YouTube channel, and has collaborated with everyone from Rick Ross to Korn. He has achieved all of this while selling millions of records, scoring and providing sound design for films like 2012’s Spring Breakers and 2014’s Transformers: Age of Extinction, and with only two actual albums released: 2014’s Recess and 2015’s gold-certified Skrillex and Diplo Present Jack Ü. The latter netted the duo two Grammys—one for Best Dance/Electronic Album and the other for Best Dance Recording on the Justin Bieber-blessed “Where Are Ü Now,” which was widely credited with revitalizing Bieber’s career and sound. The pair linked up again in late 2015 with the Billboard Hot 100 No. 1 hit, “Sorry,” one of Skrillex’s five production credits on the pop star’s fourth studio album, Purpose.

Being a man of impeccable taste is largely what made Skrillex a natural choice for the first-ever ComplexCon, where he’ll perform and serve as a member of the Long Beach, California, convention’s Host Committee with Pharrell Williams. He isn’t taking the opportunity lightly, either; ComplexCon will also be the site of a standout OWSLA pop-up shop, which will feature select clothing and artist hangouts that he’s thrilled to share with his fans. “We’re going to come in with the best stuff we’ve ever made and hopefully people like it,” he says.

Exemplifying the independent grind as a path to success like few others in music today, Skrillex shares some of the stories and secrets behind his hustle.

Major labels initially fronted on “Where Are Ü Now.”

“Believe it or not, we played ‘Where Are Ü Now’ for other record labels and they didn’t even really get it,” Skrillex says of the Billboard Dance/Electronic Songs chart-topper.Undeterred, Skrillex and Diplo partnered with Atlantic and released the record on their own labels, OWSLA and Mad Decent, respectively. “You never know what’s really going to pop and what’s not. That’s how my career has always been. It just kind of happened.”

His overtures in pop have only just begun.

Skrillex’s collaboration with Bieber isn’t his only high-profile pop partnership. In fact, for as much as he respects Bieber, he counts the work that he’s done with Bruno Mars among his best experiences in the industry. The two have hit the studio together for Mars’ upcoming third LP. “I’m joining him for his album. Who knows if I’ll do something that’s more of a Skrillex thing with him, but he has a vision for his album, and I’m helping him produce it on some of the songs,” he says. “It’s incredible. He’s my favorite songwriter to work with, and he’s the most fun guy to be in the studio with.”

On top of that, Skrillex is also calling for the release of a track he produced with Kehlani and Rihanna ghostwriter Bibi Bourelly: “We did a record. It’s called ‘Chillin,’” he says. “It’s kind of sitting there and I want it to come out, but I don’t know the status of that when it comes to Bibi’s schedule and Kehlani’s schedule. Complex, you should bug them to get their shit together and release it.”

OWSLA functions as more than just an indie record label.

Skrillex’s fearless, genre-twisting approach and divergent creativity have made him what every junior Soundcloud bedroom producer aspires to be—not to mention the envy of his peers in the music industry. This is partly why it makes so much sense that he founded the uber-influential creative collective OWSLA (its namesake is a reference to his favorite book, Watership Down), which helped launch the career of up-and-comers including Porter Robinson and Zedd.

Celebrating its fifth anniversary this year, OWSLA isn’t just another vanity imprint. Whether it’s the ’80s throwback mobile game Alien Ride that announced his Recess album or the futuristic novella that surrounded The M Machine’s two-part concept album Metropolis, Skrillex and OWSLA look to support artists like Marshmello, Star Slinger, Hundred Waters, and AC Slater beyond just shipping their music to digital platforms. “Anyone can go on a record label, anyone can distribute music, anyone can put music out on iTunes or online. But we’re the group of people who will take your music and create a world around it.”

Skrillex rides for his squad.

The OWSLA artist currently drawing the most attention is a young, cylinder-masked producer named Marshmello, who follows the legacy of other electronic producers in disguise such as Daft Punk and deadmau5. Perhaps that’s why the latter, who has become known for his outspoken Twitter rants, offered his unsolicited opinion of Marshmello earlier this year, calling him “annoying” and referring to his fans as a “brain-dead posse of deaf sheep.” Skrillex wasn’t rocking with that at all.

“The only time I really got upset [with deadmau5] was when he started taking stabs at Marshmello, acting like such a fucking bully,” Skrillex says. “Marshmello is this young kid who looks up to deadmau5, and the first tweet he gets from deadmau5 is talking shit about him. That’s when I had to stand up and be like, ‘Stop being a fucking bully to people.’”

Incidentally, deadmau5 gave Skrillex a hand early on in his career by releasing his first EP, Scary Monsters and Nice Sprites, via his mau5trap label in 2010. But this wasn’t the first time the two exchanged words on a public platform. When Justin Beiber’s “Sorry” took off in November of 2015, deadmau5 used his personal Twitch channel to broadcast his feeling that Skrillex “allowed himself to be a goddamn tool for someone else.”

“It’s sad, because I can’t change the way deadmau5 is. He knows he’s an asshole and he glorifies himself that way. I think he’s probably ashamed of it. He’s a different person in the public than he is in person,” Skrillex says of the mau5’s Marshmello disses. “He DM’ed me afterwards and was like, ‘If you ever need anybody to talk, if you need a friend, I’m here.’ He’s a little more sensitive in the DMs, but when it comes to his public image, I don’t know. Maybe it’s because his music hasn’t been as ambitious; I think he may be scared to really step outside of what he does. But when someone else tries to do something new and they’re successful at it? I’ve put plenty of other records out that aren’t as successful but he doesn’t talk about those, you know what I mean? He’s only talking about things that are popping off.”

Be prepared to fight for your vision, and then be ready to make it a reality.

This year, Skrillex produced “Purple Lamborghini,” the Rick Ross-assisted single from the chart-topping soundtrack for the latest DC Comics film, Suicide Squad. As a bonus, he also earned production and editing credits for the song’s music video, which featured the blockbuster’s star and Skrillex’s personal friend, Jared Leto, in character as the Joker. But Leto’s appearance wasn’t what the movie’s producers originally had in mind for the video; rather, the decision was made by Skrillex. The added creative power meant added responsibility.

“[They] wanted to do a music video using me and footage [of Suicide Squad]. I was like, ‘No, I don’t want to do one of those.’ So I called Jared personally, and I really had to persuade him [to join],” he says. “He’s a really good friend of mine, but for him, giving me that Joker character is not an easy thing. He really went out of his way to be a part of that video. And getting Rick Ross in it—the timing was so last minute. Everything came together at the last minute. The director, the treatment, everything.”

Big companies are not integral to your success—in fact, they can hinder it.

“Now is the time to do it yourself,” Skrillex says. “There has never been a better time. Music can be discovered in so many ways; music can blow up without having any sort of machine behind it. As an artist, you have to think about what you have and what you need and then add it to the team. That’s all it really is. We’re just an extension of the artists when it comes to OWSLA. Big companies like SFX are filing for bankruptcy because you have way more people [like that] running [the industry] than artists. The ratio needs to balance out a little bit more.” What Skrillex refers to is the Robert Sillerman-backed SFX Entertainment, which made headlines by acquiring several major dance music properties such as Tomorrowland, Electric Zoo, Stereosonic, Voodoo Experience, and the online music store Beatport. The conglomerate filed for bankruptcy at the top of 2016, lending credence to EDM’s detractors that have been predicting its “bubble” would “burst” since 2012. Surprisingly, Skrillex is bearish about EDM’s future as well.

“I’m not hating on it, but there’s so much politics now and so many things with agencies just trying to put on every DJ they can,” he says. “That’s what happens when you have bigger companies that don’t have taste. It ruins the vision and takes away what made it popping in the first place.”

Be sure to catch Skrillex’s performance and the OWSLA pop-up shop at the inaugural ComplexCon on November 5-6 at the Long Beach Convention Center in Long Beach, California.