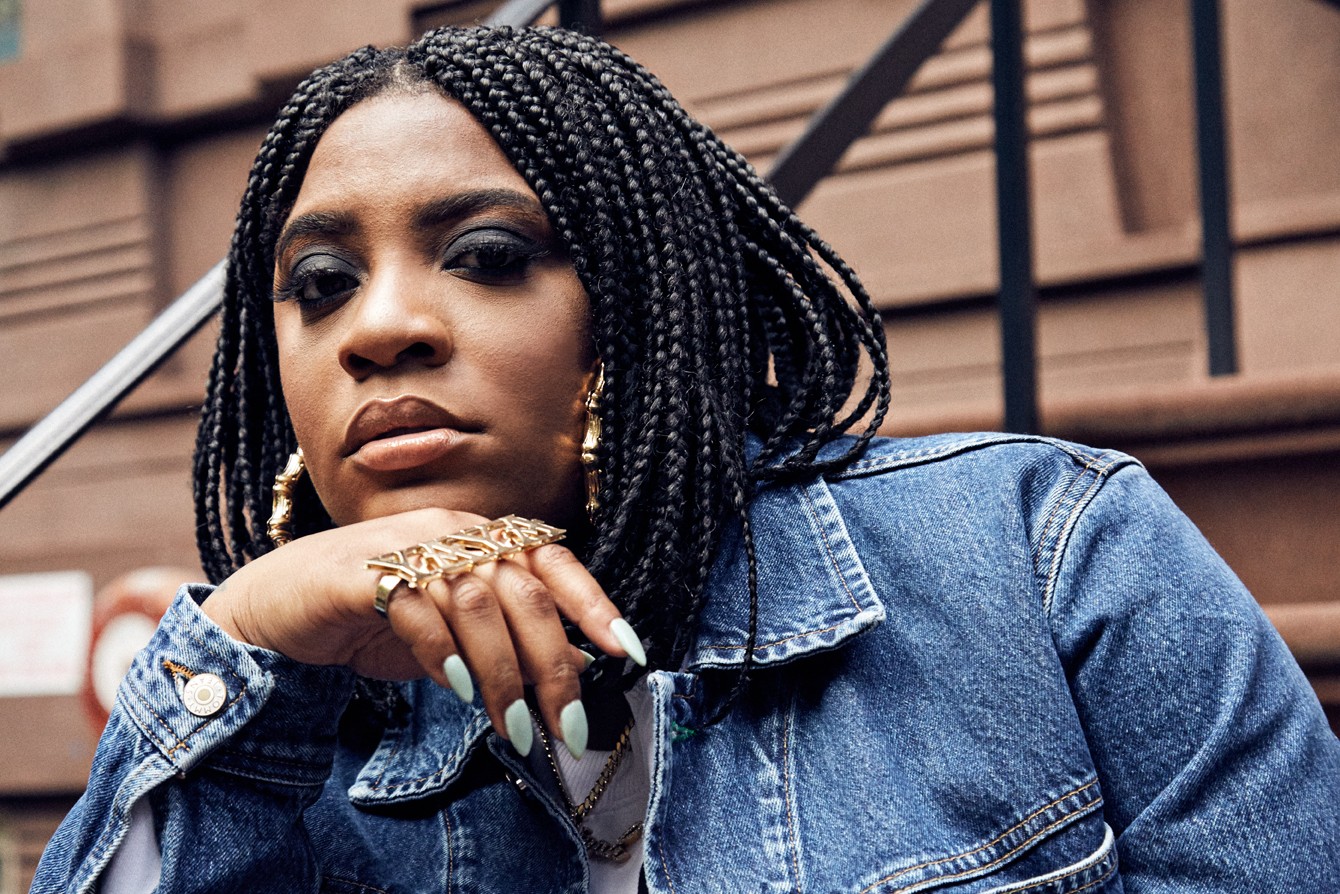 LAST YEAR, KAMAIYAH WAS WORKING AS A SECURITY GUARD. NOW, SHE’S ONE OF THE MOST PROMISING ARTISTS IN THE GAME, STEALING THE SHOW ALONGSIDE DRAKE AND YG AND PERFORMING AT COMPLEXCON. HERE’S HOW SHE DID IT WHILE STAYING TRUE TO HERSELF.

Here’s how most people first encountered Kamaiyah: receiving a foot rub while sitting on a red leather-and-velvet throne, wearing a red silk robe, and gesticulating with a full glass of champagne. The Oakland rapper—arguably the hottest thing out of the Bay Area since hyphy—appears in YG’s “Why You Always Hatin’” video just after he hops out of a helicopter into a red Mercedes, and just before Drake, riding on top of a Ferrari, starts rapping. Nonetheless, she captures the viewer’s attention like nothing else in the video, delivering the chorus: “Please, please tell me why you always hatin’?”

The thing you need to know about this song is that Kamaiyah passed on it. As in, she wrote it, recorded it, and then decided it wasn’t good enough for her own album. This Hot 100-charting single, featuring two of the biggest rappers in the game, just didn’t cut it. “I didn’t like it and I still kind of don’t sometimes,” she says. Her scraps ended up with Drake and YG.

Kamaiyah (who's performing at the inaugural ComplexCon in Long Beach, California, on Nov. 6) put herself on the map as a young, confident G-funk classicist on her debut project, A Good Night in the Ghetto, released in March. From the start, she displayed a firm grasp on what made the Cali party music of the past work so well, and what the future needs: more smart, hard-working women getting foot rubs.

Her performance was self-possessed in a way that’s hard to find in musicians years her senior (She prefers not to confirm her age, but Wikipedia puts her at 24). Subtle self-confidence shines through when she tosses out lines like “I suppose my sex game cold.” Her delivery is so casual it almost glosses over what’s she’s doing: bragging about her sex life. It’s so nonchalant, so unencumbered.

“I’m like that around-the-way friend,” Kamaiyah explains. “I don’t make myself unobtainable.”

At Kamaiyah’s first headlining hometown show, just this past June, she met Bow Wow. “It was weird,” she recalls, because it marked a full-circle moment. Back when she was about seven years old, Bow Wow inspired her to write her first rap, a female version of one of his songs from 2000’s Beware of the Dog. “I was like, ‘He’s a kid, I’m a kid—if he could do it then I can too.’ I just wrote it for myself, and I never stopped.”

At the time, Kamaiyah was bouncing around foster homes, living on and off with her grandmother in Oakland. Her dad was on drugs and her mom wasn’t around. Kamaiyah lived with her mother briefly when she was 15, but that was it. “I don’t really have a relationship with my father and my mom—it’s forgettable,” she says. “It was difficult, [but it] allowed me to become independent, because I knew that all I had was myself to depend on. I had to turn to myself to figure out how to become an adult and not just a statistic.”

She was serious about her music at a young age, and helped form the Big Money Gang, a group of three “multi-talented entertainers from Oakland,” according to their Facebook page. It was a few friends—the Baybee, Joe Banguh, M’O, Hottboy Zay, and Kamaiyah—who were into music and decided to do something about it. “My thing was just the friendships,” she says. “To not feel you have to make friends with people who want to do the same thing as you.”

Kamaiyah is generally the leader among the groups she moves with, and often says her newfound fame is just an elevated level of high school popularity: “I had charisma!” she explains. The close friendships run through her music, and give it depth; in some ways, Kamaiyah’s music is about those friendships. A Good Night in the Ghetto includes a few interludes where she talks on the phone and makes plans with the girls. The release’s artwork is an ode to those she’s close to: It shows her friends’ faces all looking down at Kamaiyah, whose back is to the camera, as she shows up to the party with Henny and chips. This one’s for all of us, it seems to say. Even the ones who aren’t here.

Since April, Kamaiyah has been grieving, mourning the loss of her best friend, James, who died of cancer. She felt numb when she signed her record deal with Interscope in March 2016, when she appeared in the YG video, when she went on the Fuck Donald Trump tour with YG in September, and when Drake brought her onstage at his Oakland show that same month. It takes time for happy moments to catch up with her. “The way stuff might impact another individual, it might not hit me. I’ll be like, Oh, you were actually able to reach point A and point B. It doesn’t hit me immediately.”

During this time, she’s let James’ words guide her. “The last thing James texted me was ‘Don’t let this stop,’” she says. He left that same message with different people in Kamaiyah’s life to make sure she never held off on pursuing this because of his imminent death. “So to keep honoring him,” she explains, “I just got to keep working.”

The work paid off. Kamaiyah was eventually discovered by YG, who became a mentor, and now she’s signed to Interscope. But up until December she was still working three jobs as a security guard, she says: “My manager screamed at me, like, ‘You’re not going back to work!’”

All Kamaiyah needed was the extra push. She had already developed her own sound, look and mission as a rapper. Her throwback tomboy style is inspired by Rakim, “LL Cool J and all the guys of his time when females were doing something totally different. I’m doing what’s been done before, but with a female spin.” It’s a look that has prompted her to tweet and clarify that no, she’s not a lesbian. You’ll often catch her wearing sweatsuits, sometimes one that’s custom airbrushed with a black Simpsons character, and an early ’90s brick cellphone in hand. She bought it on eBay and, yes, it actually makes and takes calls.

One of Kamiyah’s first breakout songs, “How Does It Feel,” released in October of 2015, features her wondering what it would be like to be rich, live comfortably, not worry about the small things. She raps, “If fame is the goal, we can’t get along/I aim to be paid, I aim to be great.” While it might seem at first glance that Kamaiyah’s just taking traditional rap tropes and adding a female spin, her music actually juxtaposes opposing ideas in a novel way. It’s conscious rap, while sipping champagne and getting a foot rub. It’s confident, but earnest—the opposite of a flex.

“When I say this shit, it just feels good,” she says. “It’s very rare that you see anybody where I’m from like this, so it’s like, ‘Oh shit—if she can do it and be comfortable in her own skin and look normal, then I can too.’”

This September, she was proving it to her hometown on her biggest stage yet. During the Oakland stop of his Summer Sixteen tour, Drake brought Kamaiyah out at the 20,000-seat Oracle Arena. It wasn’t just to perform the hook to their one collaboration, “Why You Always Hatin’,” and lend Drake some Bay Area credence. It was a full 10 minutes onstage alone, performing the songs that she wrote (and liked enough to keep for herself).

It was an important night for another reason, too: it was James’ birthday, the first one since he passed, and she had to miss his memorial dinner for the show. It was what he would have wanted.

Instead, she got the whole crowd to chant his name. Thinking back on the moment now, and about her friend’s life, she says, “Money don’t change you. We all die. We all leave the same things behind: clothes and bones. You ain’t no greater than nobody else.”

With that in mind, Kamaiyah keeps going.