Vivica A. Fox and Kandi Burruss were the special guests on tonight's Watch What Happens Live!. During the live episode, Fox had some interesting claims about her former boyfriend, 50 Cent. When host Andy Cohen asked to get her opinion on 50’s controversial Instagram comments about Empire’s decline in ratings because of “extra gay stuff,” she insinuated that he liked men.

In the clip above, she suggests he might have feelings “that [are] not quite clear.” She cites a Vibe cover (it’s actually this 2010 XXL cover she’s referring to) that had the G-Unit leader posing with Soulja Boy.  “Yeah, he just looked like a booty-snatcher on that one to me,” she said, reiterating that the cover gave her mixed feelings.

Soulja was quick to respond on Instagram, calling her a “granny desperate for attention” and “washed up.”

It’s not a surprise that everyone is waiting for 50 to put her on blast. There are already tons of his Instagram followers leaving comments about what Vivica said. 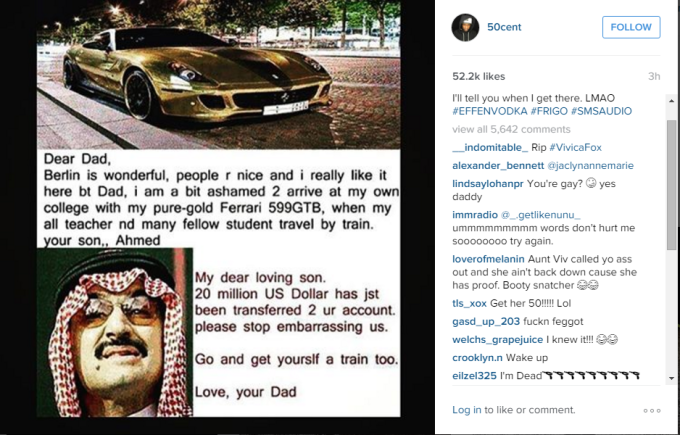 Do you think Fif has dirt on her? The answer is yes. 50's clapping back at her right now:

Man somebody should have told her I'm a Troll. I got my asshole merit badge on now. #EFFENVODKA #FRIGO #SMSAUDIO

bitch remember when you told me fuck Halle Berry and you could have played all the rolls she did better then her? And I just looked at you 👀 like what the fuck kind 💊shit did you take?LMAO. #EFFENVODKA #FRIGO #SMSAUDIO

Why she say that about 50?Hollywood Bruh these hoe's be crazy. #FRIGO #SMSAUDIO

On Monday morning, Fox went on Twitter to address 50's posts on Instagram. She seems unbothered by them and actually thought some were funny. She also has some stories in the vault of her own.

Yea I know!! But I got some stories I stored in my vault too!! He can try it if he wants..#IJS https://t.co/JbnTvgrMxm