Erykah Badu's powers over men have been well documented on social media. There are even hashtags dedicated to them. Andre 3000 started dressing like the Mad Hatter, Common made Electric Circus, and Jay Electronica joined the Illuminati and quit rapping after being seduced by the musical goddess. So why would anybody entice Ms. Badu into taking their boyfriend? That's what some crazy Twitter user did last night and Fat Belly Bella fed her to the wolves.

The tweet below is what caused all hell to break loose: 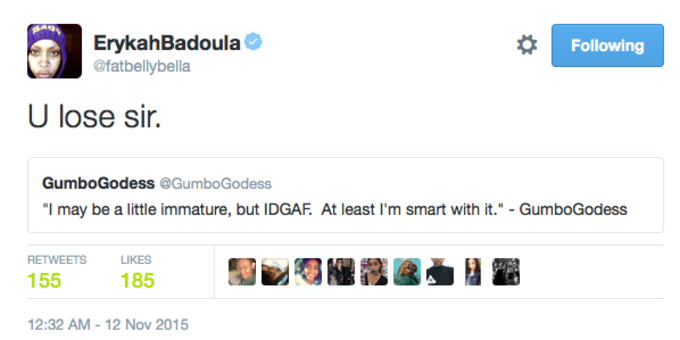 It appeared that the two had some sort of history, with people asking if they were going back and forth again. Seems like it was all in good fun but the exchange below is what got everyone else talking:

Erykah Badu Will Be Releasing a Brand New Mixtape on Thanksgiving 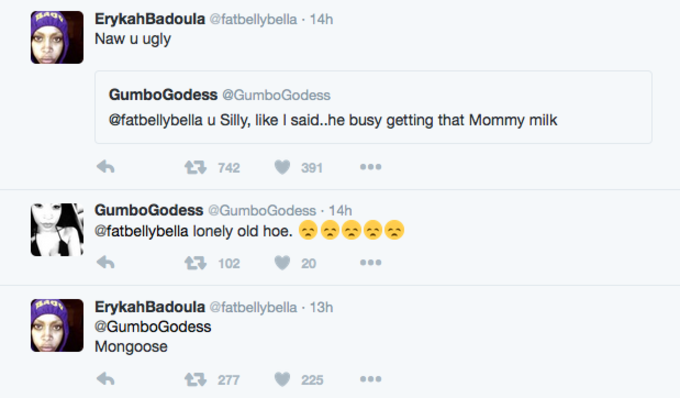 After calling shorty ugly and a mongoose, Badu slid into the DMs and threatened to take her man:

"Hey baby" was the killer.

The Gumbo Goddess wasn't faded, though:

Word to the wise, if she can make you put your phone down in this day in age, she can definitely take your boo, ma.