UPDATE: After the story below went live, Leslie reached out via his Twitter and thanked me for the write up. He also told me to text him, tweeted me a new number, and said we should do an interview to clarify everything. I agreed, sent him an intro text, and after a few minutes found out that it was just ANOTHER automated service that directed me to RyansPhone.com. He almost got me. The dance continues, Ryan.

Leslie later reached out to me and we're scheduled to meet next week. Stay tuned.

There’s something strange happening on Ryan Leslie’s Twitter feed. It’s not strange in the way that other artists like RiFF RAFF just tweet random thoughts like “BiRDS DONT HAVE RULES THEY JUST HAVE WINGS.” The singer/songwriter/sometimes rapper who graduated from Harvard at 19 years old has a Twitter feed that’s strange in the same way that Wake Up Now, the short-lived get-rich-quick scheme endorsed by a handful of rappers, was strange.

Basically, if you follow Leslie on Twitter, his account will tweet you saying he appreciates the follow and then will direct you to "hit my cell so I have you locked." Yes, Ryan Leslie sends you a phone number to call or text if you follow him. After a little digging, I found out that the number doesn't ring his cell phone. It's an automated service that, when called, prompts Leslie to tell you to text him so he can lock you into his phone. Pretty weird stuff. It becomes even creepier when the service sends you a text message after the call, before you even have the chance to respond, and directs you to his site, RyansPhone.com.

The site the service sends you to is pretty simple. When you visit, it prompts you to enter your personal information. It's confusing as to why anyone would want to send their name, address, phone number, job title, and more to Ryan Leslie, but he's trying to get it all. The page gives little explanation as to how all of this information will be used, and says that he only wants your zip code so he can hit you when he's in your city. WTF?!?! Why do you want to visit me, Ryan Leslie? 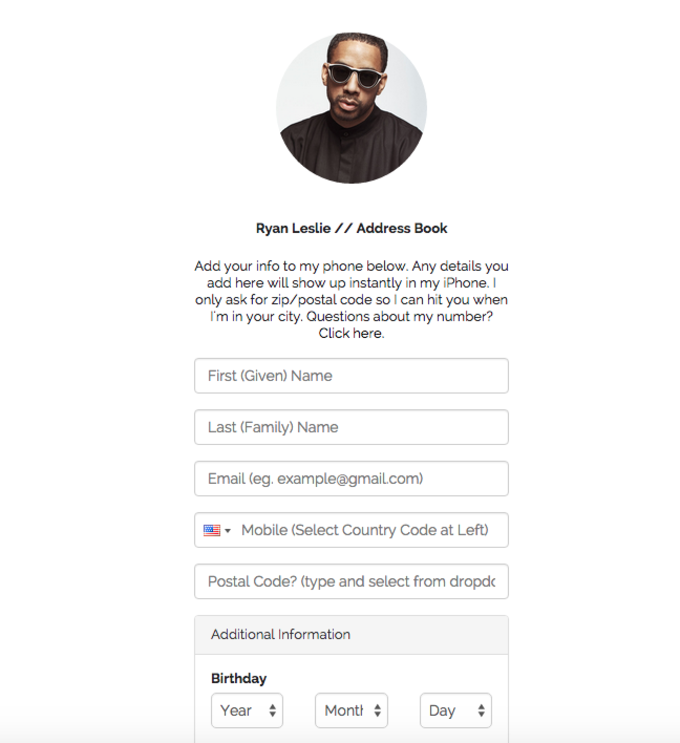 Seeing as how Ryan Leslie handles all of the distribution and promotion for his music, it's easy to understand why he would want a platform that collects all of this information, but the strategy is very concerning. It's also not clear, exactly, what he's doing with your personal information, which probably keeps a ton of people away from the jump. Through a little more investigation, I was able to find some literature that Leslie and his team have about the service, which is called SuperPhone. It's pretty straight forward, but in a nut shell, Leslie believes that social media engagement is at an all-time low, and this is an easier way to connect with his fan-base rather than on Twitter and Facebook.

Whether that's true or not remains to be seen, and largely depends on the artist. The official website—www.dmm.fm—lists Leslie, 50 Cent, Lil Wayne, YG, and more as clients, though no artist seems to use it as much as him. I cover music on a daily basis, and I've actually never seen any of those other artists even mention this program. The video below sort of explains the goal of what they're trying to accomplish, and also attempts to make this whole thing seem not that weird, though it does not succeed. 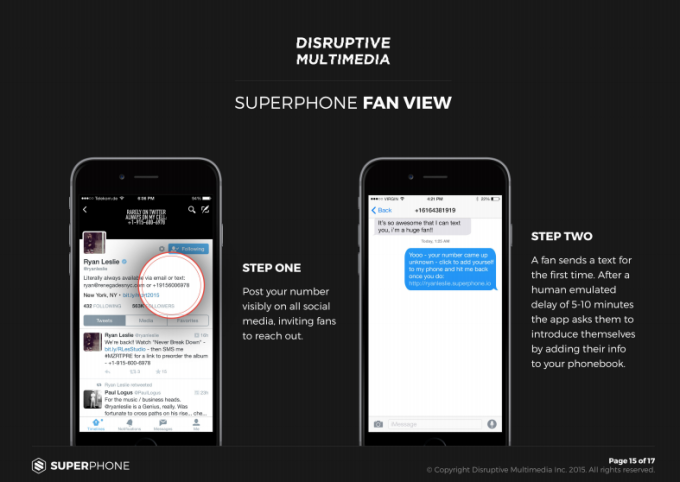 With social media and fan interaction between artists always changing, there's no telling if this formula will catch on going forward. Even so, Leslie is trying to push the envelope in the market, no matter how odd it may look. So, if you're down, give Ryan Leslie a call, and maybe he'll hit you up when he's in your neck of the woods.