Kendrick Lamar is on the latest cover of Mass Appeal and in an in-depth interview about all things To Pimp a Butterfly, K. Dot explains that there's hidden Braille within the album pamphlet. Fans first got wind of this when the album dropped so it comes as no surprise, but Lamar explains that the Braille is the actual full title of the album.

Here's his quote in full and the accompanying photo of the Braille:

A kid on the Internet pointed out that Section.80 is outlined like a book; good kid, m.A.A.d city like a film; and To Pimp a Butterfly like a poem. Is that how you see it and was that planned?
Yeah, definitely. [There]’s actually a sketch of Braille that’s added to the title hidden inside the [CD] booklet that I don’t think nobody has caught yet. You can actually feel the bump lines. But if you can see it, which is the irony of it, you can break down the actual full title of the album. 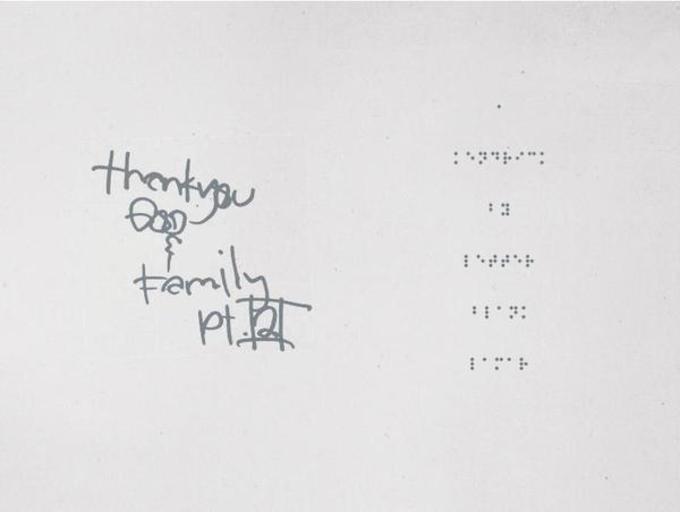 We reached out to Alison Hawes, MS, a teacher of the visually impaired (TVI) who says Lamar used uncontracted Braille that literally translates to "A Kendrick By Letter Blank Lamar." We're guessing he wanted it to read, "A Blank Letter by Kendrick Lamar," but, things happen. Uncontracted Braille is by definition the "most basic form of Literary Braille and requires the least amount of cognitive burden on the reader."

In the interview, Lamar addresses his line "Compton to Congress" on "Hood Politics" and says "Nothing is a coincidence. Put it to you that way. Them words are no coincidence. They were well thought out." You can read the full interview over at Mass Appeal now.