Anonymity can be a double-edged sword. In this Internets age, if the music is dope and no one knows who you are, people will get their Sherlock Holmes on and find you, or at least look for you - whether you want them to or not. And this is what happened when "Moves Like Ms. Jackson," the Outkast-flipping cut had the collective Internets going nuts (which only heightened when "Superfriends." hit over the weekend). The producer's information was purposefully kept anonymous, and as White Raver Rafting pointed out, mad sites posted on the track - partly because the track was dope, but primarily because of the anonymity. Many were speculating on who this producer is, but last night, one DAD reader hit us up on Twitter to speak about this anonymous producer, and after giving them our email address, I have to admit: seriously wasn't expecting all that he sent.

@thejoelmcrae confirmed what many were hinting at; we'd seen that a few sites had been calling this producer Z, but Joel says he's actually "Steven Zhu, who goes by the production name ZHU. Steven Zhu is from San Francisco, California, but currently resides in Los Angeles." Case closed, right? Not at all, androids. Joel (can we call you Joel?) did some digging, and noticed that "all of his social media sites had been wiped clean." Joel states that, while ZHU has released music in the past, a lot of those tracks come up as dead links, with blog posts featuring him being removed and old YouTube links having been deleted (Joel says that ZHU's last.fm account was wiped on February 9, 2014, which is around the time "Moves Like Ms. Jackson" hit). It would look like ZHU had purposefully scrubbed his previous work/links to his work to establish himself anew as an anonymous producer, which based on his current work, seems like a great idea.

Joel goes a step further, though. He then checked zhumusic.com, which is (currently) empty except for a "Coming Soon" note. Digging through the site's cache (!), Joel found that on February 5, the now-infamous Z-shaped logo that's been featured on the two leaks was all over the site:

Joel also found this unlisted, 33-second YouTube video that looks like it could be a teaser video, and again features that same logo:

The same logo you find if you do a Google Image Search for "zhu music." Looks like trying to scrub that entire last.fm account didn't clean up this logo. But guess what? We're far from done(!). Here's an intriguing tweet that, while not highlighting a proper SoundCloud link, is pretty telling regarding how long "Superfriends." has been around: 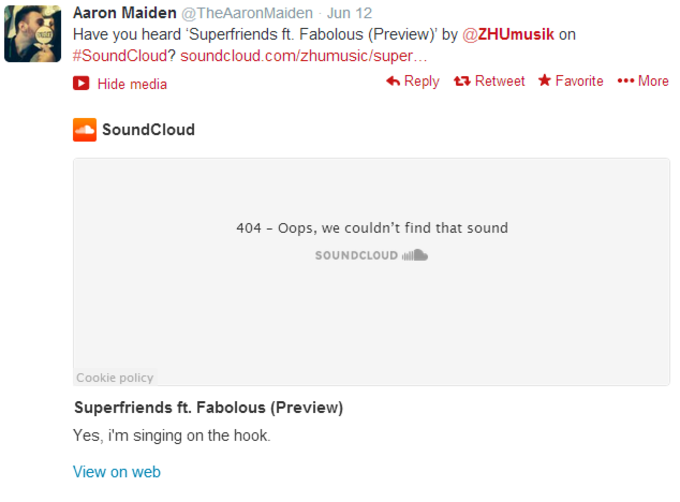 You caught that, right? ZHU apparently had a track, "Superfriends.," somewhere on his SoundCloud page last summer. We're not sure of how it sounded back then, but based on these posts (March 2012 and January 2013), we have a feeling that it was in the same vein of what is being presented today. Joel also points out that ZHU is (was?) signed to Mind Of A Genius Records (check out this tweet about a Generation Y album teaser that's no longer online), and David Dunn (the label head) has been dropping a few interesting tweets.

What does all of this say? Well, for one, it screams that "Moves Like Ms. Jackson" and "Superfriends." were both produced by Stephen Zhu, aka ZHU, aka the latest in the anonymous producer craze. It all also says that the Internets isn't forgiving when you try to scrub your previous identity (no matter how anonymous your new SoundCloud account is) - those ripples and cracks stay moving. Now, we don't present this to shut ZHU down; again, we are in love with both of the tracks, and the mystery behind them was too much for people to handle (we've had a number of people either asking for more details or offering to out this producer). The demand is there, so DAD supplies. The question now is this: where does ZHU go? What's the end game? You have our ear, and now we know that your genius isn't fly-by-night... so where do you take us now?