Just in case you didn't know, Jakes has been a bad man for a while now. Many of you know him as the leader of the H.E.N.C.H crew, which is a label and a night that features some of the finest in the dubstep sound. Not just a home to his own material, he's released material from Komonazmuk, Eddie K, Lost, MRK1, and many others in the scene. Over the years he's consistently kept it pushing, and while his name might not be in the bright lights, real heads know.

On January 18, he's embarking on a winter tour of the United States that's taking him from Los Angeles to New York. We have the scoop on those dates down below, as well as a special promo mix from Jakes to set you guys up for what he calls "one big aural audio experiment." We got a chance to pick his brain about how he came up in the scene, from the the time he spent MCing drum & bass through the best of the H.E.N.C.H discography, so far. He also kicked out a firing mix for our DAD series, featuring 30 minutes of face-melting material. Get to know!

While you’ve been a staple in the dubstep/bass music scene over the last seven years, your intro for N3GUS’ mix had us remembering your time in the early 2000s as a drum & bass MC, especially the bits you’d done with Tech Itch and TC. What fueled your desire to seriously pick up your production in the dubstep realm?
I guess it was just a natural progression, really. After spending years as a front man to various acts (EZ Rollers, Kosheen, Timo Maas, Starecase, TC, and Pendulum to name a few) it just felt right to get my hands dirty in respect to production. I didn't really choose dubstep, it chose me. I was making weird trip-hop based music to vocal but I was told later that it had more of a dubstep feel than anything else. My first foray into dubstep was down to Pinch, really. I was resident MC for Drive By, a night in Bristol which housed in the second room (at the time) Pinch's night. I walked into the room one night and just didn't leave. The real fun started when me and Addison Groove then (Headhunter) lived together. Me, him and White Boi (Orphan 101) used to just make beats an play em to each other. It was Markee from Kosheen that first gave me a copy of Reason 1 and taught me the basics. He is the one most responsible for me becoming a producer.

Did you ever face any issues of gaining acceptance as a serious producer from people who’d only known of you as a vocalist in a different sound?
Yes and no. It didn't really take me that long once Skream played "3Kout" an wheeled it on his early Stella Sessions show, and from that moment on everyone started to take notice. One thing I will say is the dnb community had a harder time accepting me than the dub. No MC from dnb has done what I did to the level I have. I think I inspired a few to take up the buttons and I say more power to them. I let the music do the talking.

I was actually going through some of my promo CDs recently and happened across The Jakes Project from 2009. You’ve put together a number of bits in the five years since its release; do you ever think about putting out a full-length album of your material?
Yes I do, and I've kinda started to put something together. See what people need to remember is that the label isn't just me and I have to cater for a fair number of artists. I'd love to put an album out now but I have other people to take care of, too. I'd like to think the process is organic and ever moving, that being said there is a lot of material that will never see the light of day. People's attitude to music is so throw away and tempory in this day and age that in order to stay "current" you have to move constantly. That makes it hard to make an album.

A big part of your work within the dubstep scene was the creation of H.E.N.C.H., which has seen a number of stellar releases and really set a standard within the bass music scene. What are some of your favorite tunes or releases on H.E.N.C.H., and why?
H.E.N.C.H has influenced so many and I'm gratefull for that. We were looked on as quality from the start, which is another thing I'm happy about. "Metal Foot" by Lost is a personal fave. It was an is so raw in its element. Snakeyes, too. "Ill" by Chasing Shadows will always be up there for me. That tune decimated dance floors an brought a whole new level of darkness to dubstep. "Drumstick" by Giant had a skank to it that will still compete with today's "dubstep." "Activate" by Eddie K and Minus featuring Beezy has to get mentioned purely for its anthem status and it really let people know about Beezy. He is one of my heros. Komonazmuk's "Bad Apple" for its caged heat. I could go on for days. Of my offerings, "3Kout" and "2 Steps Back" would be my first choices, followed by "3klane" and "Warp 9."

What can heads expect from the H.E.N.C.H. movement in 2014?
More of the same, really. Although I will say we as a whole will be getting back to the more experimental side of the sound. There will be a couple new signings first off Strikes and Digital, two Bristol lads. I've known Strikes for years and he is one hard working guy. A video team will be coming onboard some very limited art for the clothing front, too. All I want to do is keep pushing the whole thing forward.

Back in May of last year, we caught wind of your Judahh project, which seems to be more techno-based. Can you talk to us about that outlet, and what plans you may have in store for your techno side?
Yeh I've listened and loved techno for years and I get to have fun when I make my version of it. It dabbles in grime, dancehall, and acid. Deca Rhythm is the label I will be bringing it all on as they let me do what I want an have faith In it. I think more of a grime element will be coming thru this year tho. Always loved grime. It has gained support from a lot of techno heavy hitters, too, Paul Mac being the top of that list. I will be doing an album for Deca so I'll keep you informed there.

The reason for all of this talk is because you’re going to be touring the States. Talk to us about what the American massive can expect from your current live sets.
You can expect a roller coaster of sound, but I will stress this: it won't be what everyone else is playing. Maybe a couple big tunes in there, but for the most part it's going to be one big aural audio experiment.

Are there any venues or cities in particular you can’t wait to hit?
LA and New York; I love to the core. Both city's are alive with experiences, but everywhere I go I get shown love so each place holds a vibe for me.

Before we dip into this mix, we have to ask: many of us feel that your career is one that’s pretty underrated compared to other producers that came up around the time you did. Do you ever feel like you’re not getting the shine you deserve?
Hahhahahhaha. If I cared about that then I'm doing this for the wrong reasons. I'm a pioneer and I have the respect from my peers. I know that can't be taken to the bank and cashed in, but it'll do for me.

What can heads expect from this mix?
The unexpected. Thank you for taking the time and have fun. Always have fun. 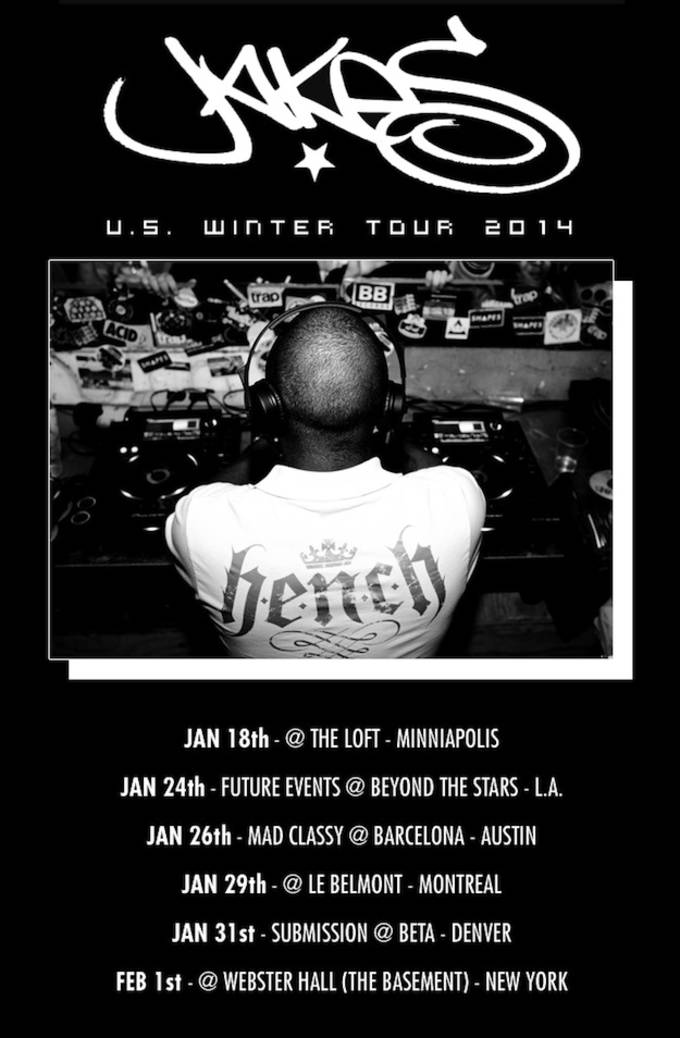