The political climate in Brazil has many questioning the wisdom of holding this year's Summer Olympics in Rio. Between the country's impeachment of the president, poor infrastructure, terrible recession, sea pollution, and the Zika virus, Brazil is in the midst of chaos and turmoil. As the Olympics torch arrived in Rio De Janeiro, protests over the high cost of the games marred the ceremony. Police used tear gas and pepper spray to disperse the crowd of hundreds of demonstrators.

But this is hardly the first time politics have played a role in the Olympics. Over the years, the games have been rife with political protest and turmoil among the many nations who choose to compete. Here are the five most powerful political moments in Olympic history so far:

Across the globe, 1968 was a year of powerful political upheaval. The United States was in the midst of the Civil Rights Movement and both Martin Luther King, Jr. and Robert Kennedy were assassinated. Europe was also having massive student protests, the Vietnam War was in full swing, and the USSR had just invaded Czechoslovakia.

After finishing first and third in the 200-meter event, American athletes Tommie Smith and John Carlos gave the Black Power salute during the national anthem. The move was highly controversial; they were booed almost immediately and condemned by the International Olympic Committee. A spokesperson for the organization said the salute was "a deliberate and violent breach of the fundamental principles of the Olympic spirit."

In a later press conference, Smith explained: "If I win I am an American, not a black American. But if I did something bad then they would say 'a Negro'. We are black and we are proud of being black. Black America will understand what we did tonight."

Long jumper Peter O’Connor refused to compete for the UK in the 1900 Paris Olympics, but did attend the 1906 games with two fellow athletes as an independent team for Ireland. They all wore green.

When O'Connor won a silver medal, the Union Jack was raised. In a stunning display of brash behavior, he climbed up the flag pole and waved the Irish flag instead.

Later in the competition, when O’Connor and his teammate Conor Leah medaled in the triple jump, O’Connor asked officials to raise two Irish flags. When they refused, he paraded around the stadium, flag in hand. Two years later, at the 1908 Olympics in London, all but a few Irish athletes refused to attend in protest for Irish freedom. 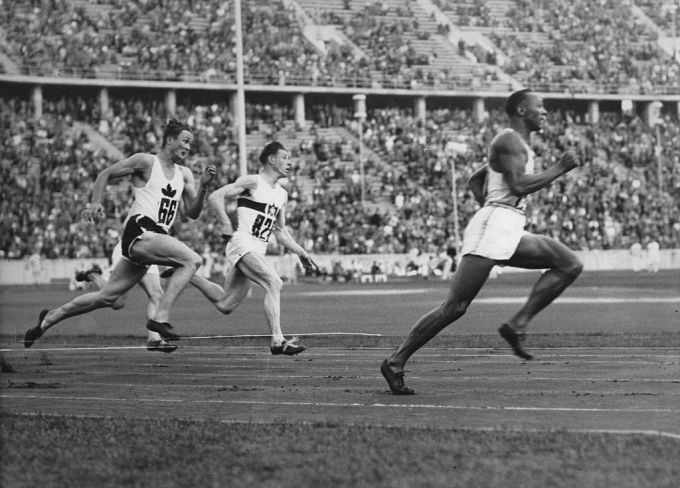 The 1936 Olympic Games in Berlin, Germany, were supposed to be about showing off German feats of strength and skill, according to Führer Adolf Hitler. Some Jewish athletes, including Harvard University track star Milton Green, and other star athletes from Austria, France, and Canada, skipped the games to protest Nazi anti-Semitism.

But the rest of the world did not boycott the games, and they weren't canceled.

One of the most powerful protests came in the form of a win. African-American Jesse Owens won his fourth gold medal of the games in the 4 x 100-meter relay. The win hit the myth of “Aryan superiority” straight in the jaw and may have been more powerful than a boycott.

South Africa was not allowed to compete in the 18th Olympic Games in Tokyo, Japan, over its refusal to condemn apartheid. The International Olympic Committee (IOC) said the decision could be overturned only if South Africa renounced racial discrimination in sport and opposed the ban against white and black athletes competing with one another. The country refused and thus did not compete in the games, and was excluded until the 1992 games in Barcelona, Spain.

Around 30 African nations refused to participate in the games after the IOC allowed New Zealand to compete. The reason: New Zealand sent an all-black rugby team to tour South Africa, which had been banned from the Olympics for racially segregated sport policies since 1964. Protesting athletes felt this was a double standard.

Among the last to withdraw, Kenya’s foreign minister James Osogo issued a powerful statement explaining the country’s decision to boycott the games: "The government and the people of Kenya hold the view that principles are more precious than medals."