On December 3, a Staten Island grand jury chose to not indict Daniel Pantaleo, the Staten Island NYPD officer who killed Eric Garner. Pantaleo applied a chokehold—an action that is forbidden by the NYPD—after Garner was stopped by police for allegedly selling loose cigarettes. An asthmatic, Garner repeatedly told police that he couldn't breathe before he died.

"I can't breathe" became a rallying cry just hours after the grand jury failed to indict Pantaleo. In Grand Central Station, around 5:00 p.m., a group staged a die-in on the floor of the transit hub, splaying their bodies on the ground below the vaulted ceiling. Later, a train of people—young, old, racially diverse—marched from the center of the station out into the street shouting, "I can't breathe."

Meanwhile, demonstrators organized in Union Square, amid the bustle of the annual holiday market. The group began marching up Park Avenue toward Rockefeller Center, where the Christmas tree lighting was set to begin at 7 p.m. "Everyone's seen the video," a protester shouted to men and women exiting Eataly with bags of groceries at Broadway and 24th Street, "Join us." 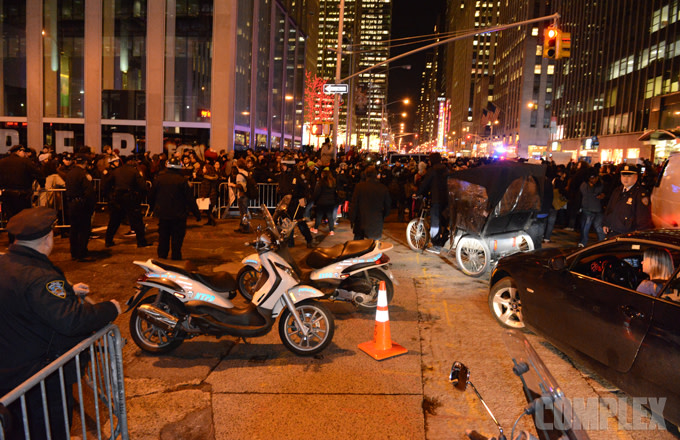 As the demonstration neared Rockefeller Center, the scene only became more surreal. A glance down 6th Avenue revealed Christmas decorations, cop car lights beating the air blue and red, and signs reading "Black Lives Matter" and "Ferguson is everywhere." The demonstration re-contextualized the familiar spaces of Radio City into a space charged with bitter hurt and anger. As one demonstrator put it, "I know it can be embarrassing to shout in front of people who are just trying to have a good time. But it is inappropriate to have a good time tonight."

NYPD officers, through sheer numbers, vehicles, and metal barricades, protected the space near the Christmas tree at Rockefeller Center, which sent the protest to Times Square and Columbus Circle. From there, a group moved to the West Side Highway and effectively stopped traffic. Cabbies and their fares rolled down their windows to record the demonstration with camera phones. Many drivers, suddenly stuck in traffic, raised their hands up inside their cars in support of the protests. There was a moment when it looked like south-bound traffic might recommence, but a spontaneous line of people broke across multiple lanes of traffic; a string of individuals locking arms stopped the cars. 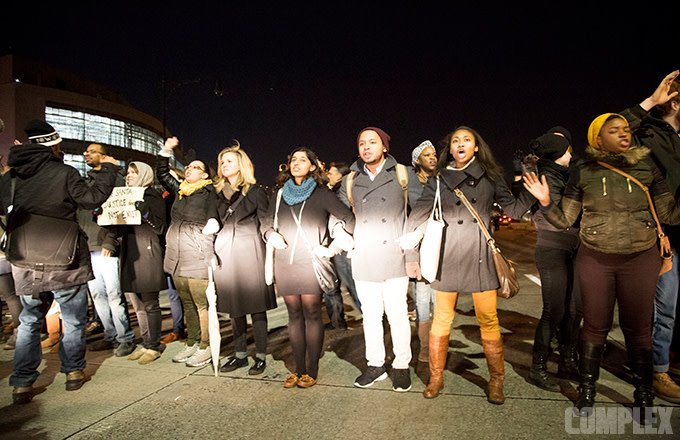 Above the demonstration on the West Side Highway, a police helicopter hovered. NYPD officers trailed behind the mass of protesters moving down the now empty stretch of road. People high inside Trump Place, on Riverside Boulevard, were visible—they flicked lights on and off and waved.

Demonstrations continued on into the night as New Yorkers expressed their anger, hurt, and dissatisfaction with the failure to indict Pantaleo. Coming just nine days after a grand jury failed to indict Darren Wilson for killing Michael Brown in Ferguson, Mo., this is bigger than some local news item.

"The whole world is watching..."