HUNDRED DOLLAR TICKETS, $14 BEERS, AND MILLIONS OF HASHTAGS: HERE'S EVERYTHING YOU NEED TO CONSIDER BEFORE HEADING TO MUSIC'S BIGGEST WEEKENDS.

HUNDRED DOLLAR TICKETS, $14 BEERS, AND MILLIONS OF HASHTAGS: HERE'S EVERYTHING YOU NEED TO CONSIDER BEFORE HEADING TO MUSIC'S BIGGEST WEEKENDS.

Back in 1969, the events that occurred on a small farm in Sullivan County, N.Y., had a profound impact on the world and changed the shape of live music forever. Most likely you've heard the stories and seen the pictures of Woodstock—you might even know someone who attended. History was made on that August weekend, not only because names like Joplin and Hendrix and Santana performed in front of a crowd of nearly a half a million people, but also because chaos resulted: Helicopters were needed, the U.S. Army was called in, and the New York State Thruway was shut down. The combination of these large-scale problems and the legendary onstage moments instantly transformed this live music festival into one of the biggest cultural events of the 20th century.

Woodstock was easily the biggest music festival, but it wasn't the first and certainly not the last. Since then, the business of live festivals has changed dramatically. Forty-five years after Woodstock, at last year's Bonnaroo, one general admission three-day ticket cost $234. To put things into perspective, for that price you could've bought one Woodstock ticket for each member of the Migos and the original Wu-Tang Clan and still had money left over.

In today's industry model, touring has become essential for artists, and they’ve got an insane number of festival rosters to try to get on each year. One would be crazy to try to attend them all. It can't happen, right? Well, it sorta did happen, if you consider sitting in front of a computer, meticulously researching and pouring data into a spreadsheet of 12 of the major music festivals "attending." Since mid March, I've virtually visited every tent and teepee from Texas to Tennessee, Chicago to Chattahoochee Hills, digesting every piece of analytic data from each acre of festival grounds. I got attendees, acts, arrests, and more, and I did it all without having to endure a shitty celebrity DJ set, taking a single selfie, or needing to flash a flicka da wristband.

(Who knew you couldn't find the amount of port-a-potties at Coachella?!) Gone are the days of the mega rap tours, like the Hard Knock Life Tour and Up In Smoke. Giant, rap-dominated shows like Rock the Bells and Paid Dues have crumbled, but the summer festival continues to reign supreme, emerging from a crowd of teen-angst and glow sticks.

Since the days of Woodstock, these gigantic outdoor events have had historic implications. However, in the last few decades, these types of festivals have turned into huge money-makers. From artists and promoters, to brand sponsors and food and drink vendors, everybody wins. I mean, imagine paying $14 for a beer at Sasquatch. (No, Molly was not included.) The surge in outdoor festivals not only has a huge effect on the music side of the biz, but the economic impact to the hosting cities is also massive. To give you a better sense of the numbers, here is the Complex Music Festival Season Breakdown. 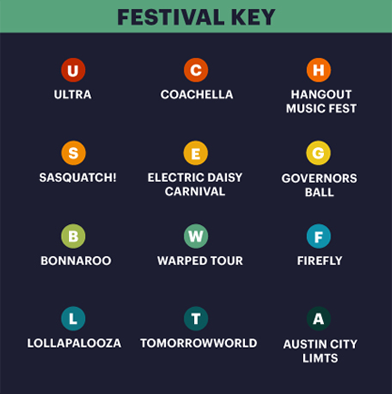